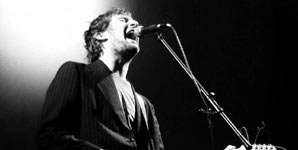 In the middle of the hottest London summer on record, four piece rockers The Highs lit the touch paper to their career in the inferno of Cobden Men's Club.

High ceilings and mirrored walls set the scene for the Industry Showcase night '4 sticks live'. Two act preceeded but the highlight was 'The Highs', creating, in their own words "a beautiful epic sound that lies somewhere between Sigur Ros & Muse". '

Before they began, blonde films premiered their 8 minute short film of 'The Highs' explaining the band's influences explaining that their songs are composed more like classical music.

Film over, the screen lifted and 'The Highs' raised the temperature up even further opening with their signature number 'Smashing Bottles'. Somehow lead singer and guitarist Dave Best managed to keep his cool in the heat to belt out his lyrics with ease.

Bassist Saul had a deafening re-verb effect on his guitar adding to the red-hot atmosphere. Celloist Gregg provides a certain versatility allowing them to play more mellow music.

An added dimension to the gig was provided by 'blonde films' VJaying with the band, projecting visuals behind them, matching in perfect time with the rhythm of the music, ending with a sea of flames.

After their opener the audience showed their appreciation with the loudest applause of the night, energy for 'The Highs' to crank it up further with tracks 'I Waited', 'Burn' and 'Dirty Water' and a rapturous reception ensured a much appreciated encore.

'The Highs' first hit the scene as 'The Dave Best Band' over a year ago and were soon headlining the London unsigned circuit. Since then, like all great bands seem to, they've had to deal with the departure of drummer Henry, but that hasn't set them back. In fact it probably made them work harder and with new drummer Pino they're ead singer Dave, bassist Saul and cellist Greg are tighter than ever and look like a band that have played together for years.

Having headlined the unsigned circuit for a year, this summer they'll be touring the UK, Europe and the US. Combined with blonde films these guys are the best live performers I've seen for a long time…