It sounds like a daft idea and smacks of corporate greed but the Da Vinci Code has indeed made it to the PS2. On the back of the Ron Howard cinema release, you take control of the main character Robert Langdon, an American symbologist (I don't know either and I read the book) as well as Sophie Neveu, a saucy little French nymph who is a police expert in cryptology (or deciphering codes to the uninitiated). The 'plot' takes you through Europe trying to figure out a riddle posed to them by Neveu's grandfather, a mysterious man who just so happened to be a member of a secret group protecting the "true" origins of the Holy Grail and a man whose corpse poses questions. All the time being pursued by an annoying French policeman who believes Langdon not only murdered Neveu's grandfather but sounds as if he is an extra in "Allo Allo", as well a strange albino monk with anger management issues. You can't really complain about the plot, after all the book itself sold 40 million copies. Love it or hate it, if you can read you probably read it. However, does the game live up to this success? 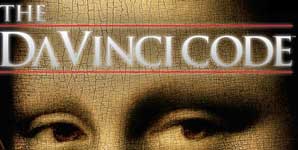 Put bluntly, no. The game tries to be intellectual by offering a wide variety of brain teasers, puzzles and quizzes. In patches these can be quite challenging and enjoyable but it is not backed up by any form of game-play. You wander around looking for clues and items and often wander either into a puzzle or, more than likely, someone who doesn't like you very much. At this point you have to try and fight your way out of trouble in a shockingly poor melee mode that leaves you with more chance of hitting the TV than your opponent. This basically leaves you trying more stealth moves than anything else which is annoying for a couple of reasons. Firstly, this is not Metal Gear Solid. Secondly, the enemy AI is not good. This sounds like a stealth benefit I know, but you spend so long wandering around looking for one item, it is too easy to avoid everyone. At some point you want them to catch you to put you out of your misery. Whilst the game does offer mission objectives they are obscure or refer to a specific area or room you need to proceed to, which without the added benefit of some sort of map, does not help one iota.

Visually the game is believable to look at and there are some tidy replications of the Louvre and Westminster Abbey, but nothing groundbreaking. The sound is ok and the fact that you are not immersed in the voices of the actors in the film somehow lends the game more credibility as it distances the book from Hollywood. Background music and scores also compliment the game well and hint at suspense. There isn't really any but if there was the music would have you on the edge of your seat.

To conclude, it is likely that this is another quickly manufactured Hollywood spin off that attempts to milk the fans of the franchise out of everything it can, thus maximising revenue streams. It may appeal to fans of the Da Vinci Code that like puzzle books and aimlessly wandering around famous buildings whilst frustrated and getting more so.