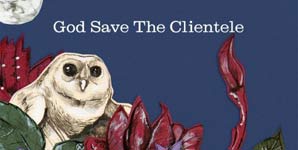 The Clientele's Strange Geometry was one of 2005's best albums, with its breathy vocals, 60s paisley pop sound and shimmering instrumentation. God Save The Clientele sees the Scottish band try to repeat that album with added sunshine, but with less added salt than the recipe needs.

The songs wash over you, one after another, with none staying between the ears after they've gone. In fact, you may find yourself thinking they've played the same song (at least) twice. There is room for gentle 60s pop, but it's easy to underestimate what made the great pop great.

Occasionally, the album picks up momentum (Bookshop Casanova is energetic and has a wry humour, Dreams of Leaving closes the album on a lovely quiet downer). While bands like The Clientele, Panda Bear and Field Music try hard to sound like bands from an earlier era, they all seem to have forgotten that it's not enough to 'sound a bit like' their heroes. Dead Ringers impersonates famous people badly - The Clientele are drifting the same way.