Review of Forts Album by The Boggs 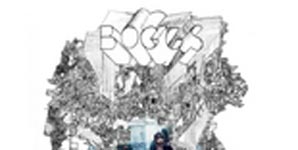 The Boggs are a band from New York (by way of Berlin), and Forts may well be the most infectiously great disc you'll hear this year. With an album that at times recalls The Clash, The Pogues and, erm.., Adam and the Ants, it is clear that there is an innate sense of rightness about lead man Jason Friedman's musical sense. In their own words, The Boggs play 'proto post folk garage punk folk punk blues and disco.' But naming all those genres does Forts a disservice. They don't even begin to hint at how organic the music sounds, how fun rock can be when let loose with some hooligans for company.

The drums are dirty, sweaty and intensely hypnotic, driving the Irish punk feel. Yet at times, the songs can be quietly, perfectly delivered. This is the Boggs' third album, after a four year hiatus during which Friedman basically restarted the band, and it is by some distance their best and most accessible. With elbows out, it has barely made room for any other disc since first hitting the CD player, and seems unlikely to relinquish its grip anytime soon.