The Bleeding Hearts - You Bring Me To My Knees Single Review

The Bleeding Hearts
"You Bring Me To My Knees" 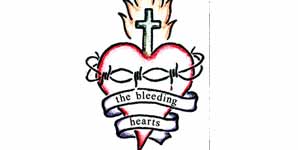 Based in London, The Bleeding Hearts are a quintet who are quite difficult to define musically. In their own words, "You won't ever find us trying to hone our sound - we don't have a sound, and we don't want one - we've got lots and we want moreâ¦ We haven't found a formula, because we're not looking for one." Even based on the two tracks here, this is quite apparent.

Beginning as a folk-tinged ballad, "You Bring Me To My Knees" reveals itself to an indie-pop anthem that would have been huge a decade ago. The chorus is big and bouncy, the melodies charming, and it all leads to very pleasant listening. "Out Of Sight, Out Of Mind" has little in common with it, instead being a sweet string-laden
lullaby. It isn't nearly as immediate as the title track, but is still worth a listen.