I first encountered The Von Hertzen Brothers a couple of years ago when they toured as the main support to 90s Brit-rock nearly men The Wildhearts. As a live band, The Von Hertzen Brothers came very close to blowing all competition way out of the water. They were entertaining, they were loud, they had massive riffs and they were a little bit silly. 'New Day Rising' is their sixth studio album and it was produced by GGGarth Richardson, the producer behind the last three Biffy Clyro albums, the first Rage Against the Machine album and Gallows' 'Grey Britain'. With that in mind you might expect this pairing to be responsible for one almighty riff heavy rock record. What they have in fact delivered is an album of two disconcertingly varied halves. 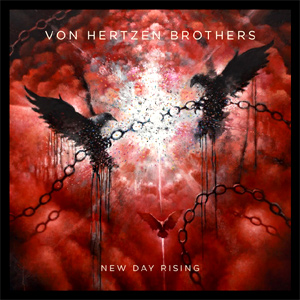 The first half is every bit as bombastic and anthemic as you might have hoped. 'New Day Rising', the LP's opening and title track, kicks off with a massive, arena sized Foo Fighters riff, which leads into a life affirming salvo. The chorus is huge and it has just enough balls to stop the chorus straying into cheesy European metal territory. This is huge, and it is loads of fun. Just what rock music should be.

Next up is easily the best track on the album, 'You Don't Know My Name' which takes a few cues from their aforementioned touring partners The Wildhearts. This song is an insane thrill ride which turns a vast and ridiculous amount of corners during its 3 minute duration. It begins with fidgety riffs, goes into a punk fury coupled with Steely Dan flavoured jazz chords, and ends with a Queen-esque vocal harmony section. This is a jaw dropping tune and what 'New Day Rising' really needs is a few more of these, because the second half of the album isn't quite as entertaining.

The second half focuses more on folk influences, and it meanders a little, completely straying from the direction and momentum set up by the first few tunes. You get the euphoric 'Hold Me Up' which adds violins into the mix, the jaunty sea shanty of 'Dreams' and the seven minute 'Sunday's Child'. All of this stuff is pleasant enough, but the tempo settles into a very mid-paced kind of rhythm and it gets a little samey towards the end, despite some great performances by the musicians.

'New Day Rising' feels like a bit of a mongrel. The two mismatched parts might have made for two fairly good EP releases, but as a whole album, the thing just does not fit together. 'New Day Rising' is still an excellent showcase for these brilliant musicians, but maybe a little more focus and quality control wouldn't go amiss.