Review of High Risk Behaviour Album by The Chats

It's difficult not to feel just a little bit excited when a new punk album comes out; this is one of those genres that has changed so much over the years that rarely do we get to hear something that truly takes the genre back to its roots. The Chats are an Australian trio that call themselves "shed rock" rather than punk, but their debut album High Risk Behaviour is still the most punk thing we've heard in years. 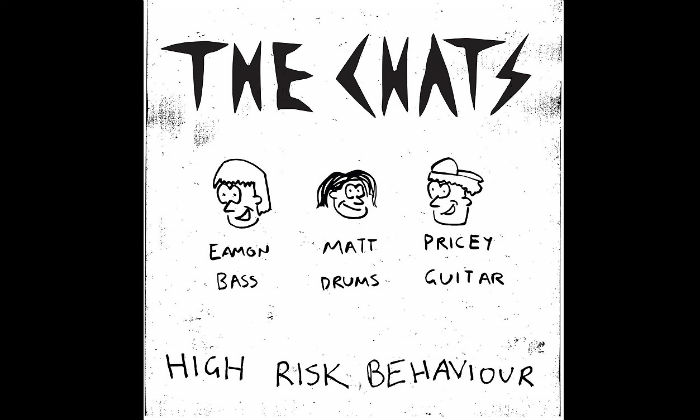 The 14-track album is full of the short, fast-paced songs that you associate with traditional punk bands and there's also that non-singing style that Johnny Rotten made so popular in times gone by. With scuzzy guitars, a strong DIY ethic and frankly childish lyrics about getting drunk, STIs, petty crime, eating and being ill, it's the light-hearted album we needed to hear this week.

High Risk Behaviour opens with Stinker which makes getting drunk in the sun sound terrible, but introduces those furious drums and dirty strings which we'll find in many of the subsequent tracks. It's not the best track to start with if you're trying to convince people you're not ripping off the Sex Pistols, but as the album goes on you do just stop caring about that.

Drunk n Disorderly and Billy Backwash's Day are vastly similar tracks to Stinker; honestly, a lot of the songs sound pretty much the same. On the other hand, The Clap is kind of infectious, if you'll pardon the pun. It's a sing-a-long anthem that we just know will be a signature live song for years to come.

What makes High Risk Behaviour different from traditional punk records like Never Mind The B****cks and Ramones is that it's laced with surprisingly skilled guitar riffs, with songs like Identity Theft and Ross River really illustrating that talent. We can't help but think that The Chats are capable of a lot more than what they're showing.

The bass-heavy Heatstroke is a musical highlight with a melodic lilt to the vocal which is basically unheard of at this point. It's still fast and furious, but compared to the rest of the album it captures that dazed feeling of the titular affliction rather well. Keep The Grubs Out is brilliant too, and will be relatable to anyone who has been turned away from a club for their outfit or their shoes. The sarcasm in this narrative is hilariously strong with lyrics like: "Anyone with a mullet is a thieving, violent, volatile thug", and then later "Feel free to come back when you get a haircut".

However, The Kids Need Guns was a bit of a disappointment. It could've been an ironic commentary on gun violence, but instead it's just a shallow statement on school shooting sprees that would have been just as effective if the lyrics had been "School shooting sprees happen sometimes. The end.". It's about as political as it gets on this album and there's nothing really of substance which is kind of a shame for a punk band. Though I suppose you can't really criticise a "shed rock" band for not being "punk" enough.

4573 is experimental compared to the rest of the album with its scratchy string sounds but it also sets up the final stretch of the album as something a bit more tuneful and polished. Album closers Do What I Want and Better Than You are easily the most accessible tracks on the record as there's actual singing on them (kind of) with gentler drums and melodic guitars. That doesn't mean to say they're any better than the other tracks, but it was nice to see that The Chats do have some versatility.

High Risk Behaviour is so intrinsically Australian that most non-Aussies wouldn't know what the hell was going on most of the time, and we love it for that reason. But there's also something incredibly cringeworthy about The Chats' attempt to sound edgy and non-conformist on this record. If they genuinely believe they have produced something rebellious and offbeat, that's really terrible news; if, however, it's a tongue-in-cheek commentary on the corniness of so-called anarchistic artists, then it's bordering on genius.