Review of Red Red Skies Album by The Catenary Wires

I can say with some confidence that this is the first time I have reviewed an album by someone who is an Officer of the Most Excellent Order of the British Empire (OBE) for her services to Competition and Consumer Economics. Well, one half of The Catenary Wires, Amelia Fletcher, is the person who changes that. Amelia has quite a CV. Not only has she, along with partner Rob Pursey, been delighting us with her music for almost thirty years in bands Talulah Gosh, Heavenly, Tender Trap and Marine Research but she has also found time to complete a D.Phil, become a senior director and latterly a Professor. Oh yeah, she's also the mother to her two children (it's people like Amelia who make you wonder whether you could be doing more with your life... she is, if nothing else, quite inspirational). 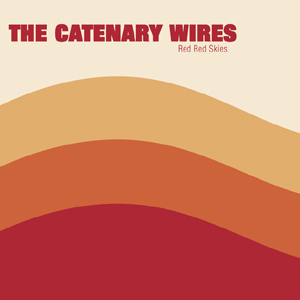 The Catenary Wires (wires that hang between pylons/overhanging electric train cables, just in case you, like I, didn't know) is Amelia and Rob's latest venture. Formed last year, from their home in Rolvenden, Kent as a two piece 'band', The Catenary Wires aim to impart their pop harmonies but "gentler, more emotive and melancholy" than some of their previous work.

'Red Red Skies' is the duo's first eight track mini-album and follows the release of their first single earlier this year, 'Intravenous'. The beautifully crafted take on all consuming claustrophobic love pairs Amelia's and Rob's vocals expertly and is a fitting introduction to the album and the band. Amelia's high and angelic voice works throughout to counter Rob's deep baritone notes (the obvious comparison would be Isobel Campbell and Mark Lanegan).

The album's main themes centre around love, longing and dysfunctional or failing relationships. Songs like 'When You Walk Away', 'The Records We Never Play' and next single 'Throw Another Love Song On The Fire' tell bitter-sweet tales of love, countering the fondness of a memory with the sadness of the eventual reality. Along with 'A Different Scene' and 'Like A Fool', these songs share a similar format where vocal duties are shared more or less evenly between the partners as the delicately balanced, sparse arrangements jangle along to complement the layered harmonies.

Where the album works best, however, is where this is not the case. 'Intravenous' aside, the songs that work better are when Amelia is left to take centre stage alone to leave Rob (sorry Rob) providing instrumentation and backing vocal. As the album draws near to its close, 'Too Late, I Love You', with its slightly sinister guitar and Amelia's effective and emotive vocal and then finally and foremost, 'Things I Love', show the band in their best guise. Reminiscing about The Lemonheads, Swiss-German painters and Popcorn amongst other things, The Catenary Wires help build up a picture of a past that is sometimes difficult to bare but inevitably revisited: "Why do things I love remind me of someone I don't?"

'Red Red Skies' by The Catenary Wires is as gentle as intended, mixing harmony and melody through well told stories of heartbreak and heartache. It's unlikely to trouble the charts, but it's also unlikely not to be loved dearly by those who take the time to get to know it.