Review of Heights EP by The Beaches

It seems that for forever there's been a Shirley Manson shaped hole in the collage that is modern music. OK, we know that she and Garbage returned a few years ago, but that wasn't to stay and, whilst we've got a few ladies who know their own minds - Lily Allen and Courtney Love spring to mind - emancipation seems mainly now to be bought by shaking your rump. 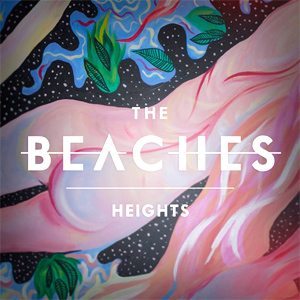 The inherent misogyny of entertainment is dealt with full on by The Beaches here on 'The Dance'; a glam rifferama that points its dirty fingernails at the media impresarios who've trivialised an entire gender, and screw the consequences. You'd believe that the artists in question had been through this wringer themselves given the cynicism and bile they reserve for their targets, but The Beaches are an all-female quartet who range in age between 16 and 18, hardly time enough for rock's machine to have chewed them up and spat them out.

Their debut EP 'Heights' is five tracks of spunky, youthful energy overdrive, dosed on oestrogen and caffeine. Mainly in your face feisty, a reminder of their tender years comes later on 'Hey, I Love You', singer Jordan Mills going through a list of revelatory first-love highs with  all the relish and naiveté you'd expect from someone who isn't even old enough to get tattooed. It's also a song that bursts with attitude (if not invention), with a chorus that punches well above its weight and a scuzzy pop musical sentiment that - like the band collectively - never tries too hard to be cool.

It's a measure of critics' general confusion about all-girl bands that the Canadians have been described as sounding like Haim (no) or 'Grungey' (even less so) or even Patti Smith (what planet are you on?). What they are without wanting to stick convenient handles on is interesting; punk with a small 'p' and blessed with equal amounts of attitude and pleasing rawness. Opener 'Strange Love' deals with the loss of identity that being in that state can sometimes cause the victims to experience, whilst Little Pieces finds Mills straining to be heard above the turned-up-to-11 instrumentation, packing the sort of drama which most other females would avoid for fear of being dismissed as too complicated.

There aren't enough women who kick male ass in rock; The Beaches may be too young to drink in bars, but they'll tell you stories that will make your hair curl. As 'Heights' proves, everyone's new favourite princesses are ready to ditch the prom and play in your garage instead.