That F***ing Tank are a British instrumental noise rock duo, working along a similar vein as American counterparts such as Lightning Bolt. Granted, dropping vocals completely from the mix can limit a band's commercial appeal, but over the past decade, That F***ing Tank have become incredibly good at what they do and 'A Document of the Last Set' is more or less a highlights package from the last ten years. 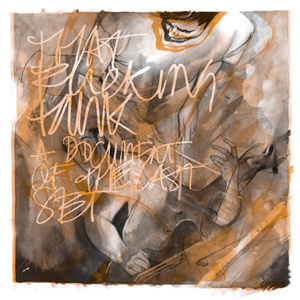 After a short introduction, the album properly begins with 'Making A Meal for Beethoven', which mixes sludged up, jagged riffs with precision drumming. There are elements of math rock and squeals of noise rock trading blows with big dumb punk riffs. Of particular note in this song is the middle section, where the guitar gets bored of sounding like a guitar and takes to emitting radar blips. This opening deluge is about as comprehensive an introduction to That F***ing Tank as you are likely to get, never mind the next eight tracks.

The collection takes a slight dip on the next tune - 'Wonderful World Of' - which is the only time on the album where it feels like vocals would be a welcome addition, but from here on in, 'A Document of the Last Set' is a fairy relentless non-stop barrage of guttural fuzz noise.

You get the epic, winding 'NWONWOBHM' which transforms and mutates over and over again from a slow build to an old school thrash workout which impressively incorporates the entire neck of the guitar. You get the flat out assault of 'Mr. Blood' and the more restrained exercise in tension which is 'Acid Jam'.

A criticism you can level at most noise rock bands is that they are utterly devoid of personality and a sense of humour, but on the closing triple punch of 'A Document of the Last Set', That F***ing Tank proudly unfurl theirs for all to see. 'Bruce Springstonehenge' takes a riff from its semi namesake and puts it through the TFT filter, 'Dave Grolsch' is fantastically titled and the closing song 'Keanu Reef' brings proceedings to an absolutely crushing conclusion.

If you have to fault That F***ing Tank for something you could say that this collection contains no real new material which is a bit of a shame, but as an introduction to their madcap world, it works. You could also say that, at times, there is so much going on in terms of weird structures that it becomes hard to follow and work out when one song becomes another, but this type of music is not supposed to be easy. That F***ing Tank are playing to a fairly specific niche but when they are so well versed in what they do, the initiated few can reap huge rewards.