Review of My Dark Places Album by Television Personalities 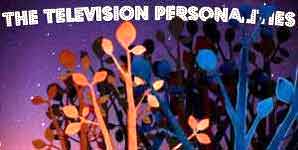 Well, well, well…look what the cat dragged in. If it isn't Mr. Treacy and his disjointed band of Cronies, back with more satirical and slightly crooked observations of the world and society in which we live.

Some mental health problems, drug addictions and nights in prison since their last offering, and Treacy and Co. have cooked up yet another perverted introspect into the addled life or Mr. Daniel Treacy. 'My Dark Places', like most of the Personalities catalogue, has a very slap dash sound to it. Music with the sense that anyone with some cheap keyboards, a guitar, bass and drum kit, maybe even pots and pans, could produce. Well this maybe so, but no one else could adopt the same festered apathy that Treacy has fathered for all these years and poured all over his music.

Since releasing the very first D.I.Y Punk single in 1978, fundamentally, nothing's changed with TVP sound. It's still makeshift, melancholic, awkward, macabre and often ridiculous. Yet, regardless of them sticking to their guns despite the technological advances, this album is a welcome sidestep from the polished, yet purposefully accidental music going round at the moment.

No one else is doing this, at the moment, or even ever, yet it's influence on acts like Babyshambles, to name one, is undeniable. Treacy, and the rest of the band, sit comfortably in their own musical niche, untouched by anyone. If I were in their position, I'd stick to my guns aswell.

Despite its honest and rather depressive title, 'My Dark Places' still manages to be uplifting in parts. Treacys whimsical outlook on the darker side of his persona can be very easy to relate to. Infact I challenge you to not see yourself in this album, if you aren't there, then you're lying to somebody.