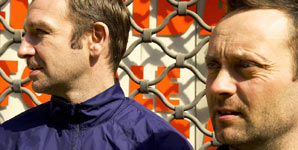 Swayzak - some kind of bastardized Patrick Swayzee, men with hang ups - formed in 1993, way before the internet boom and back when samplers had massive 2meg memory and a computer was something to heat the room. So, the passionate and crazy duo return to their old selves again, launching their new album "some other country".

James Taylor's fatherhood sabatical is over, David "Brun" Brown managed things during his absence anyway, and now the two return together, united.
As the two musicians move into their 10th year of exisitance, Swayzak's new opus sounds mature and full. We can only be amazed by so much courage for intense feelings and for so much fun in experimentation. With "Some other country," James Taylor and David "Brun" Brown deliver what to date is their most expressive album. Fasten your seat belt, it's a well-directed assault on the doors to our perception.