Drone-metal kings Sunn O))) have spent the last few decades building their legacy with records such as 'Black One', 'Monoliths And Dimensions' and most recently 2015's 'Kannon.' Across these records Sunn O)))'s sound has been defined by incredibly slow pace, the highest level of volume, distortion, feedback etc and ghoulish atmosphere. Their songs can feel swampish grim, mightily epic and sometimes both, but always impenetrable and not for the faint of heart or the impatient listeners. They also have a reputation for being one of the loudest bands you can see, if not thee loudest and they play Leeds tonight to prove it. 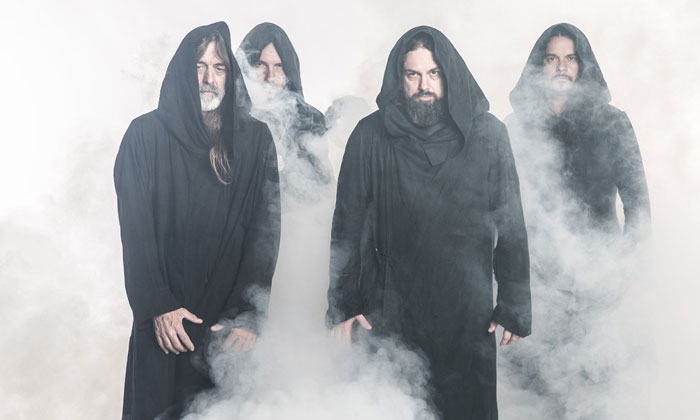 Even before the doors have opened for this show, when the band are sound checking, you can hear and feel their vibrations from a few rooms away in the university bar. Then when it is time to enter, the intrigue and suspense is already ignited by smoke engulfing the room. The smoke machines fire until you can barely see anything on the stage and only really what's right next to you.

When Sunn O))) actually do begin, it's in a way that's going to raise your eyebrows, even if you're fully aware of this band's reputation. We begin with vocalist Attila Csihar taking his place amongst the fog, cloaked up, at the front of the stage and it is so cloudy that you'd be forgiven for missing him. Of course, everyone realises things are getting started as he proceeds to do what sounds like a summoning chant, for demonic entities, with his voice switching between being croaky and a spiritual hum as well as the fact that not a single word sounds English or like it belongs to any language.

This goes on for several minutes and the most unsettling thing is that you know it's only a matter of time before instruments come in and as you can just about see other cloaked figures enter through the mist, Stephen O'Malley and Greg Anderson take up their guitars and the criminal amounts of feedback begins. Sunn O)))'s sheer number of amps take up the majority of the stage, so you're given much warning, but nothing can prepare you. Even if you're wearing ear protection, this is still going to be deafening and you ain't leaving unscathed. You can even feel the vibrations running up your legs as the maximum level of feedback threatens to break your ears and physically push you back. How snail-slow they play also makes it feel like there's not a single crack in their monolithic structure, not a single weak spot.

In metal, you've got bands like The Dillinger Escape Plan and Napalm Death who are notorious for being absolute tornados of energy live and on record. However, if those kinds of bands are unstoppable forces, then Sunn O))) are an immovable object. From start to finish you're just paralysed, by the sheer volume, the arresting aesthetic and the horrifying intensity.

There's a section of the show, where guitars are put away and it's just Csihar, a horn and keys. Whilst it's still ear-splitting, it's one of the more merciful parts of the night and a reminder that Sunn O))) have more to them than just being super loud. There's a real meditative healing power to this set too. Even without the axe power, the oscillations will still make you tremble.

The highlight and most startling part of the night comes at the end. After quite some time with just the occasional chord and seemingly never-ending feedback that follows, Csihar returns to the stage in thee most outrageous costume you'll ever see. He's swapped out his regular black cloak for one covered in little mirrors and atop of his head is a spikey, silver crown. He looks like a fushion between The Witch King and Jack Frost. In addition, he has a glove with lasers shooting out at the finger tips, which he often shoots at the spikes on his head so they can bounce off and stab into the audience.

Sunn O))) had some signs up saying they didn't want any recording devices to be used for their show and you can understand why, as they want to maintain their element of surprise, which there sure is a lot of.

The only complaint about this show is that it had to end. When it does, you walk outside back into the normal world and you're not sure if you can. Sunn O))) live is like discovering addictive dark magic, that you don't want to give up and know won't be found anywhere else. This was the furthest you could go on one end of the spectrum with a maximum absence of compromise. Whether it's Sunn O)))'s intentions to deafen and freak you out or if the audience is just collateral damage of what they feel like doing, Sunn O))) take their vision and don't let a thing get in the way and that's all the best art for you.