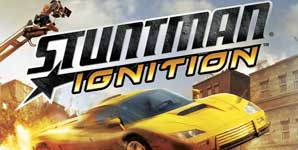 Stuntman: Ignition is the second chapter in the Stuntman series with the original being released on the PlayStation 2 in 2002. Stuntman now hits the PS3 with Ignition with the basis of the title remaining constant. You’re tasked with providing the stunts for various movies on a variety of vehicles whilst bombing on through a range of differing environments and scenarios.

The scenes are staged and you have to hit the directed moves with precision and timing in order to progress. Depending on the vehicle you are manning it might be a power slide in the correct space, a jump, sliding under random exploding paraphernalia or passing close to other vehicles or ramming them. All these moves are generally done on motorcycles or in cars, monster trucks, wagons carrying missiles or any other variety of vehicles that you can imagine being raced in movie. In each movie that you provide the stunts for, you will have about six different scenes to complete. Generally you will have a set number of lives, usually 5, to use up before the director demands a re-shoot of the entire scene. Herein lies the major strength AND weakness of the game. Randomly bowling around the same scene gradually weeding out your mistakes can be a lot of fun. The scenes are slick and there are no ends of things for you to bounce off of when you crash. Seeing these failures in slow motion replays is highly [if slightly sickeningly] enjoyable. However, if you cannot get past a particular scene it can, by the same token, become very frustrating and repetitive. However, much of the enjoyment in this game comes from working out how to complete the scene in one unbroken run whilst ‘stringing’ out trick after trick to achieve maximum results. Achieving this is very satisfying. As you progress, the less mistakes you make will the more points you score in the final scene reckoning. The more quickly you score points, the quicker you can unlock other movies, scenes and gifts.

The movies themselves are very tongue-in-cheek and a tweaking of some movies you may have seen. The graphics, replays, sound and voices play on this theme and add to its appeal. In your first picture you blast through a mountain town on a motorbike avoiding explosion, spewing lava and disintegrating building in something quite like ‘Dante’s Peak’, it’s quite clearly not however, for it is ‘Aftershock’ the movie! Completing the course results in a movie cut scene of a building sliding off into the lava amongst explosions, as you seamlessly ride by hopping onto floating rocks or something like that. This irreverence is amusing and is something else that keeps you hooked in wondering how the scene ends.

In multiplayer mode gives Stuntman: Ignition another edge. There are three modes, Stunt Tourney, Backlot Battle & Backlot Race. The former is a turn-by-turn battle for points playing the single player game, in a most points wins scenario in any unlocked mission. Backlot Battle is a race to complete any given stunt on a movie. Once the stunt is completed it is locked so whoever can pull of stunts the fastest will win. Backlot Race is just that, racing your opponent around the movie scene circuits. Finally, you can build your own ‘set’ with unlock-ables that you acquire the further you progress through the single player game. You create your own stunt runs that you can challenge others to in a multiplayer format either on or offline.

Stuntman: Ignition is a slick and thoroughly enjoyable romp through danger that will have you going back for ‘just one more attempt’. It can be frustrating in patches but you know that is as much down to you and your ability as the game itself, so you will persevere for that satisfaction of ultimate success.