Review of Metal Queen Theme Single by Stuffy & The Fuses 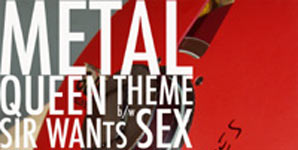 Time stands still in Stuffyworld, where it is permanently 1996, Bis have just appeared on Top Of The Pops and Urusei Yatsura have released yet another limited edition 7 inch. Nothing wrong with any of that I hear you all scream loudly, and to some extent that’s patently true, except for the fact that the aforementioned both had something unique that made them stand out from everything else around at the time and neither sound out of place a decade or so later.

‘Metal Queen Theme’ on the other hand, while championing all things lo-fi from the shambolic noise of Eska and the Yummy Fur to the whimsical pop of Ash or Easyworld, is cute and hard to dislike – the chorus itself is a dream as the boy/girl harmony implores us to “Dial 2005…for the Metal Queen!” – but at the same time it should come with a stamp screaming “Lack Of Ambition” in bold letters as for all its sentimental value, if I really wanted to listen to this kind of thing then each of the artists mentioned earlier would probably be a better bet.