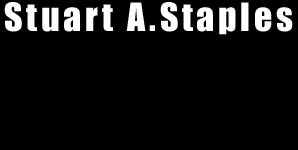 "Leaving Songs" is the second solo release from Stuart A. Staples of the Nottingham band Tindersticks. Staples is set to play a one-off show in London on June 5, before embarking on a handful of dates around Europe.

For those unfamiliar with the work of Staples or Tindersticks, the man's vocals will come as a startling surprise. He's like Barry White but without the sexiness, a booming talent that at times is hard to distinguish. He also proves to be highly talented at instrumental arrangement, with "Goodbye To Old Friends" beginning as a campfire strum that is gradually built to incorporate fine harmonies, string and brass sections, and various pieces of percussion. The sweet-natured "There Is A Path" proves to be equally kind on the ears, and the rousing "One More Time" is a country piece heavily assisted by slide guitar.

Where "Leaving Songs" truly excels is in the two duets, with the crisp vocals of Maria McKee more than holding their own on the melodic and soothing "This Road Is Long". Lhasa de Sela's contribution to "That Leaving Feeling" is undeniable; she has a beautiful voice that is more than equal to Staples'. The track is also another grand piece of music that is a pleasure to listen to, again incorporating a wide range of instruments. "Pulling Into The Sea" concludes the record in deserving fashion, with delicate acoustics backing up another fine hearing of Staples.