Review of Yard Album by StringerBessant

You may remember Gary Stringer and Jack Bessant as the singer and bass player in 90's funk rock goons Reef, their 1997 hit single Place Your Hands is still in regular rotation on play lists in shopping centres, pubs and television shows. Following the dissolution of Reef, Stringer and Bessant went on to form the fairly lacklustre Them Is Me, who proved only to remind you have how great a band Reef were in their prime, and now, after a brief reunion tour with Reef earlier this year (with more shows planned for December as well as one or two festival appearances) Stringer and Bessant return with Yard, a folk inspired acoustic album which is sonically a million miles removed from the sounds of both of their previous bands. 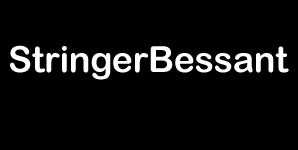 The album opens up with the slow burning Hey Girl, building with ethereal and delicate lead guitar lines over acoustic guitar chords. The only thing that reminds you that this has anything to do with Reef are Gary Stringers distinctive vocals which sometimes jar with the more sombre and quiet tones the instruments create. His is a voice more suited to big, loud stompers. Nevertheless, Hey Girl is a fantastic song, which sets up the rest of the album brilliantly, and once you have got used to the fact that this isn't going to be just another rock album, there is a wealth of gems to uncover.

Gems such as the similarly sombre Peeling Back and the miserable Shutting Down. Both songs offer soulful introspection and delicate acoustic guitar melodies. It cuts back the layers of bravado and flash showmanship often associated with the music of these two musicians, offering an intimate glimpse seldom seen.

It is not all doom and gloom though. Give Me the Keys and Lord Please Come make use of a full band and call to mind some of the later Reef songs from the laid back Rides album. Give Me the Keys particularly seems to have its own sense of humour and closes the album on with a stupid, wide grin on its face.

Make no mistake, Yard has moments of brilliance, but on the whole, it just does not stack up to former glories. With any luck, next year will see the release of a new Reef album, if not just a few more cash-in reunion shows, just to remind you how great these guys can be when they get it right.