Review of Find My Way / Black & Blue Single by Stock

In this day and age and in the industry I work in, nothing should really surprise me anymore but I have to say this does. Why the so called hip hop community in the UK have yet to get behind this amazing artist is way beyond my comprehension. Originally from America Stock moved to the UK a few years back. So far he has had a track on a huge selling movie soundtrack in America, performed in front of huge crowds up and down the UK (if you ever get the chance to see him live do so, he is amazing and the only Rap act I have ever see that plays both the horn and guitar on stage) and had huge club play success. So it does beg the question why the UK hip hop radio community have yet to get behind him. Hopefully this two track single will change all that. First up "Find My Way", basically it is everything you would expect from Kanye West at his non pop electro best. Yes there is an electronic feel, but not the electro pop dross most of acts seem to be using these days. The track manages to keep all the guts n grit you would expect from a hip hop track that has more than enough potential to cross to the masses. "Find My Way" simply deserves to be a monster hit around the world. From the droning keyboard to Stocks first delivery you know this track will just make people jump at any club whilst still being friendly enough for radio. The second track is more for the real full on hip hop heads "Black & Blue" is as dark as its title and is already so respected by the hip hop world in America that it's on DJ GREEN LANTERN'S mix tape (yes he of Eminem fame and currently DJing for Nas & Damien Marley on tour). Also doing the rounds is a bootleg mix of "Find My Way" using Tribe Called Quests "Find A Way" which is really clever. So come on hip hop radio heads wake up n' smell the coffee, coz big things are gonna go down for Stock in 2010 watch this space. 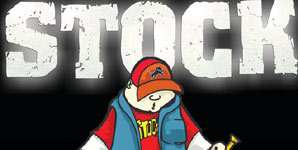