Review of All Things Real Album by Steve Adey 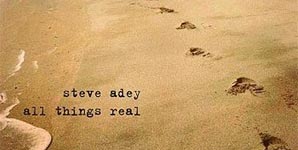 The spaces between the notes can be over-emphasised in the name of earnest art, or they can add real echo space for contemplation. All Things Real, the debut album from Edinburgh singer-songwriter Adey, is a fantastic, mature piece of work. Produced by Calum Malcolm, who also generated the sound of The Blue Nile, the album is a richly deep, and slow, river of sound - if Cat Power had a voice like Micah P Hinson, she'd be making music like this. Wonderfully edgy, the ten songs include two covers: one, of Bob Dylan's Shelter From The Storm, will be one of the best things you hear this year (guaranteed).

The way that it builds, from slow piano ballad, is a great way to treat the material. The other cover, the Bonnie 'Prince' Billy song I See A Darkness, is given a more orderly treatment. However, the interesting thing is that a blind listen wouldn't have picked out those two tracks from the eight originals - Adey shows a deft writing hand, and a way of extracting emotion from his instruments and the recording space. If you have a soft spot for Talk Talk, The Frames or The Blue Nile, All Things Real is set for the space they left behind.