Review of Learning You By Heart Album by Stephen Inglis 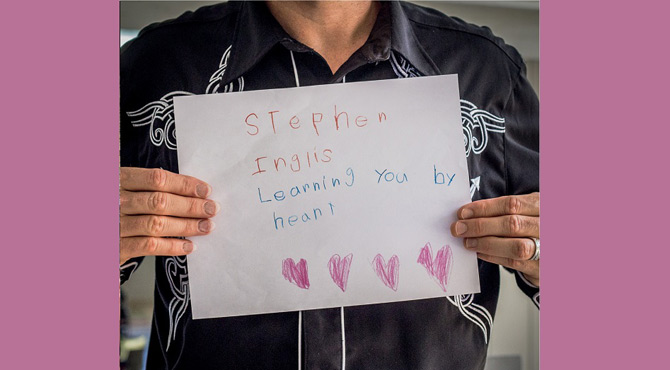 Slack-key refers to open tuning, which is where the strings of the guitar are loosened or "slacked", resulting in the six strings forming a single chord, usually G major. According to tradition, Mexican cowboys, called paniolo, introduced the style to Hawaiian musicians in the late 1900s.

Inglis does both: uses open tuning (slack-key) and plucks the strings with his fingertips. Joining Inglis on the ablum are: Jon Hawes, on upright and electric bass; Tom Piranha Gierman, on drums; Michael Piranha McGraw, on electric bass and harmonica; Eric Petersen, who handles the keyboards; Kilin Reese, on mandolin; Chris Lau, also on upright bass; Paul Sato, on banjo; and Erika Elona, who provides harmony vocals.

'Learning You By Heart' comprises a baker's dozen, thirteen tracks. The first track is 'Blind With Haste'. After a preliminary solo acoustic guitar, vocals join in; then the band kicks in and the song takes off. It's a great way to begin the album. The next number is the title track, a casual, chilled tune with country-pop nuances.

A definite traditional Hawaiian flavor saturates 'Maria Luisa', which somehow manages to include a bit of country twang. And the combination of the oh-so-right chorus and the stellar backing vocals provides pure listening pleasure.

'Don't Postpone Joy' may be the prize on the album. Featuring Tuck and Patti, the jazz duo, the tune is slow and gooey. 'Cold Sunday' is another track that deserves a mention. It's heavy with blues nuances and is probably the coolest and most contemporary of the tracks on the album.

'Wildfire' displays what fingerstyle is all about, as Inglis struts his stuff on what can only be described as a rock and roll folksong, with a majestic guitar solo tacked on the end. 'The Long Run' is a minimalist tune, featuring Inglis on guitar, along with a harmonica. For such a simple song, it's quite passionate.

When advised that Inglis plays Hawaiian slack-key music, they usually expect native Hawaiian folk music, grass skirts and lots of heavy drums and maybe some coconuts. That's not what Inglis writes or plays. His music has a Southern California, country rock feel to it. So it might not be what some listeners bargained for. But it is good music and worth listening to.