Stephanie Dosen - A Lily For The Specture Album Review

Review of A Lily For The Specture Album by Stephanie Dosen

Stephanie Dosen
A Lily For The Specture
Album Review 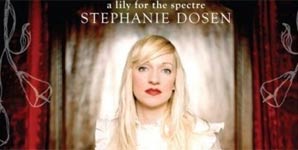 Stephanie Dosen is a new name to me (her Leeds gig in February slipped under the radar, it seems), and the first fact that my research turns up is that she was featured in DVD releases of "Dawson's Creek" and "Party of Five". Eeek! I'll try not to let this colour my judgement.

"This Joy" is a pretty enough track to open with, featuring a waltzy rhythm and finger-picked acoustic guitar, and Ms Dosen has a very pleasant voice that isn't overly sullied by those vocal affectations and mannerisms that a lot of women singers seem to employ in the belief that it marks them out from the crowd. In fact, she has a very soothing voice, particularly when layered on such tracks as "Vinalhaven Harbor".

And the opening two tracks set the template for the album: picked guitar that sound almost harp-ish at times, strings, double bass, bits of percussion, piano, and layered vocals. "Only Getting Better" has a more country flavour, while "Owl in the Dark" is all subdued percussion, nicely judged morbid strings and plaintive harmonies. In fact, this record's best moments are its "darker" ones, such as this track and the title track, which is set against a backdrop of what sounds like insect or bird noises (but probably isn't) and has lyrics about swallowing a knife and cutting oneself with every breath.

"Death And The Maiden" has some interesting chord progressions and manages to do that trick that songs sometimes do of sounding like a load of other songs without actually being any of them. "Like A Dream" is suitably sleepy, while for some reason I can imagine The Corrs doing a number on "Way Out". "Lakes Of Canada" succesfully evokes lazing about in boats, and "Daydreamers" is aptly static, but by the time I get to "By And By", it feels like ideas are being recycled.

Which leads me to The Big Question: does Stephanie Dosen do enough to stand out from the crowd in a market that's over-saturated with sensitive singer-songwriter types? Well, in short, I don't know. Time, no doubt, will tell. This isn't the most innovative or challenging record you'll hear this year. It's a bit one-paced, the lyrics sometimes don't come through well, and I'd have liked some more variety in the instrumentation, but it's pretty enough, and it's soothing and calming. I can see it being played late on a warm summer night or on a lazy Sunday morning. And sometimes, that's enough.