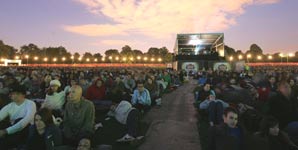 With over ten years association with film, Stella Artois will break new ground in 2006 by introducing a unique event to the UK festival calendar - 'Studio Artois Live' - a boutique cinematic carnival featuring screenings and a variety of film inspired entertainment, including live music and theatre.

Following on from the huge success of 2005's Donnie Darko screening in Kensington Gardens with the National Symphony Orchestra, and Pulp Fiction with the Fun Lovin' Criminals in Manchester's Heaton Park, which entertained 20,000 film fans, the two-day outdoor film spectacular, will take the cinematic experience to even greater heights celebrating the diversity, theatre and magic of cinema.

Each day of 'Studio Artois Live' is themed around a cult or classic film, with all the elements of that film - set, character, music, cinematography - brought to life throughout the day, taking you on a journey, which culminates in an epic screening. On Saturday, Tarrantino's Kung Fu masterpiece 'Kill Bill' will bring a martial arts, Japanese feel to the day, and on Sunday 80's Indy classic 'Ferris Beuller's Day Off' will inspire an 80's retro theme.

Stella Artois have gathered the best names in film entertainment to create a truly unique and unforgettable programme for 'Studio Artois Live'. Champions of short film, Future Shorts will create a bespoke experience in the form of a cinematic village, featuring their vintage cinema and a host of cabaret acts.

Adventures In The Beetroot Field - known for their pioneering music events - will create a film inspired musical programme on the main stage, to build anticipation right up to the screening, Acts include;

The BFI will inhabit the weird and wonderful Gaia dome - a hexagonal arena with screens showing work by international directors. All this combined with premium food, and Continental bars, guaranteeing the perfect summer day out.

This year also sees the collaboration of Stella Artois and the credible short film outfit Future Shorts, who together will present a series of eclectic short film fusion events, 'Future Cinema' across the country.

In June, August and November, Stella Artois and Future Shorts present the touring 'Future Cinema, a 'Gothic Burlesque' themed fusion of short films, re-scored features, music and performance art. The first two events took place in London on the 1st June at SeOne club and Bristol, 9th of June at the beautiful Ashton Court Manor were a phenomenal success and received rave reviews. The second season of events will be incorporated into the programmes of prestigious UK film festivals, Edinburgh in August and London in October.

Senior Sponsorship Manager for Stella Artois, Kevin McQuilan, comments, "We are very excited about the forthcoming programme of events. With music festivals on the rise year on year, and a distinct absence of film festivals specifically designed for the public, we realised there was an opportunity for Stella Artois to further challenge consumers experiences in film, by creating the first ever film festival designed entirely for them.

We are also delighted about our partnership with Future Shorts. The two brands are united by a shared commitment to bringing short film to the forefront and championing the merits of this medium ".