If you like your performance art showcased to a brilliantly Avant-Garde pop soundtrack or you like your quirky, Electro-infused music to be enhanced by an inspirational theatrical performance, then Stealing Sheep are a must-see band. The Liverpudlian trio, still riding high on the success of their latest album 'Big Wows', made their way down to Elsewhere in Margate to put on their wholly unique and utterly captivating live show. 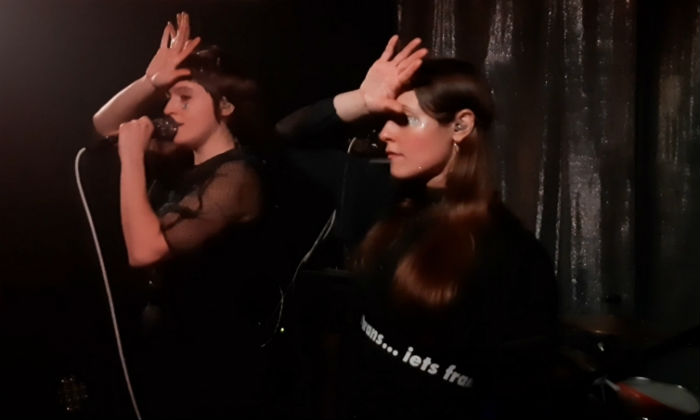 In the room below the record store, Stealing Sheep played a sold-out show on a stage barely big enough to contain them, let alone some of their props. Rebecca, Emily and Lucy made their way through the tightly packed crowd, holding hands dressed in coordinated black outfits with varying degrees of glitter on their faces. It was evident from the very beginning that they had come to party, they had come to put on a show and they had come to enjoy themselves.

'Why Haven't I' came as an early highlight with its swirl of synth notes and compelling vocal exchanges. Emily's walking bass lines and Lucy's percussive panache saw to it that each arrangement was perfectly balanced. Both Rebecca and Emily added in some wonderfully flamboyant keyboard sequences into the mix to create a sound that was both futuristic and occasionally retro. There was a nod to the heyday of '80s Electro but enough creativity and artistry to make Stealing Sheep completely original.

The entire performance was mesmeric. From the almost Ladytron sounding 'Back In Time' and the tongue-in-cheek title track of this year's album with its deliciously Funky bass, through to a pumped up 'True Colours', Stealing Sheep delivered a performance worthy of a far, far larger audience. The delight in the faces of the three musicians was infectious, with Rebecca and Emily in particular seemingly having the best of times doing what they do best.

With their rainbow windmills, neon sunglasses, and synchronized and choreographed movements, Stealing Sheep made each song an event and gave every song its own identity that complemented the music. Taking time out from her drumming, Lucy, joined by Emily and Rebecca, at one point made her way to the front of the stage for what was to be a jaw-dropping, spine-tingling performance. Accompanied by looping keys, Lucy took up the lead vocal to sing out an extended and unequivocally superb version of 'Just Dreaming'. The lights had been dimmed as the three girls stood alone at the front of the Elsewhere stage. It was a stand-out moment as Lucy sang the haunting, ethereal vocal with Rebecca and Emily stood by her side and all three moving as one to the gentle beat of the song.

The main set was brought to a blissful end with a version of 'Show Love'. As Lucy drove the beat Emily and Rebecca joined in on vocals before the song broke into full flow and Rebecca lifted the song with a stunning lead vocal performance. After a brief break, the threesome returned to the Margate stage donned in inflatable suits which they duly, and somewhat awkwardly because of the minimal space, plugged in. A playful 'Jokin' Me' proceeded to skip along with all three performers joining in vocal harmony as they stood precariously on the lip of the stage in their over-sized outfits. Rebecca, Emily and Lucy carefully took off their wind-sock like garb and concluded their show with another great vocal performance on 'Shut Eye'.

Stealing Sheep put on one of the best shows I've had the privilege of seeing this year. The entire performance was enthralling from start to finish. It had drama, theatrics, humour and terrific music. If I could give it six stars I would, I thoroughly enjoyed it, it was brilliant.