Thrillseekers chase the dream; the ultimate wave, the sheerest cliff face, the biggest drop, the fastest coaster, the highest this, the longest that. That urge, that drive, that determination or that sheer single-minded and unrelenting want rarely diminishes. It may after time, through age or responsibility, become latent and lie dormant but given the right signals, the sleeper cell within all of us is still there to be activated. 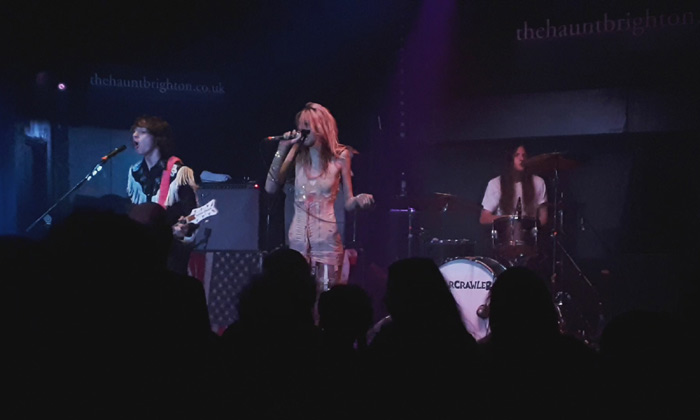 When you see something for the first time, when something affects you in a way that is not entirely explicable, and when you are left speechless because you are experiencing something quite special then your senses are enlivened and something quite life-affirming happens because of what you've seen or heard or experienced.

Seeing and hearing Starcrawler live is an experience that will leave you speechless, will enliven your senses, will awake that want and that drive and will give you a life-affirming fillip. Starcrawler are a wake up call, a tonic for the weary, a shock to the system and an assurance that there are still bands out there that can challenge, can say something new, can scream and shout and can almost single-handedly counter-balance the characterless and mass-produced fodder that passes as music sometimes.

Starcrawler are not wallflowers, not shoe gazers and not in any way reserved or tentative about what they are or what they do. Starcrawler are full-on, in-your-face provocative and incendiary. They are exciting and scary, full of passion and fury and primed ready to literally shake you up. If you've stopped chasing the dream, Starcrawler will make you think again. They are a musical swell or a rogue wave all on their own.

In a thirty-five minute main set at The Haunt in Brighton, Starcrawler whipped up a frenzy and delivered an unforgettable, unmissable performance. In all the time they were on the stage, aside from to address "the old geezers at the back", the band barely spoke, but they didn't need to. The performance was exhilarating; packed full of passion and fury. Lead singer Arrow De Wilde and guitarist Henri Cash in particular put on a show that the tightly packed crowd will remember for a very long time.

With the ferocity of a death metal band, the intensity of 70s punks, the hooks of the best garage band you've ever heard and the spirit of an alternative performance artist, Starcrawler drew on every element they could to deliver their music. They played out almost all of their eponymous debut album at breakneck speed as they shook the very fabric of the building. Dressed like she'd just stepped off the set of a post-apocalyptic zombie flick in a corset that accentuated her skeletal figure, Arrow contorted herself up from the stage floor and began like a violent squall of untethered and feral ball of super charged thunder.

As the band performed all of their most potent songs, the crowd became equally as energised with Arrow proving to be the most captivating lead singer that you couldn't afford take your eyes off for a minute. Looking possessed at times, she channelled everything she had to deliver drama and theatre to a mesmerising and edgy performance. The band's two best known tracks came as a double whammy mid-set as 'Ants' and 'I Love L.A.' were blasted out. 'Full Of Pride' provided a moment for Arrow to sing face to face to a guy at the front as she stroked his face and sang "'Cos you're a pretty little b***h, no matter how I word it" and the retro throw back 'P***y Tower' gave Henri and Arrow the chance to alternate the vocal.

'Let Her Be', amongst others, highlighted just how good Starcrawler are as a live band, but also to some degree the amount of restraint that was employed to capture their songs when they recorded their debut album. No such restraint or reserve was in evidence at any point of the night. Starcrawler played at full tilt as if their life's depended on it. As the set drew to a close there was an intense run through of one of their briefest tracks, 'Train', and a chance for a bit of crowd participation during the sing-a-long part of 'What I Want'.

The band returned for a one track encore to the delight of the appreciative crowd. Arrow rose, twisted and strutting on the stage and performed 'Chicken Woman' liked a crazed animal. She then leapt from the stage to literally shake everyone she could get her hands on before crawling across the bar where she threw drinks into the audience as she went. It was like watching a demonised and deranged entity ferociously whirl about with complete abandon and it was a spectacular performance to witness. Arrow exited through the fire escape and Henri played out an extended ending perched on the end of the bar. Forty five minutes had passed but what a forty five minutes it was.

Starcrawler were both explosive and extraordinary proving themselves to be every bit a must see live band. Catch them if you can, you won't regret, or forget, a second of it.