A new band from Asheville, North Carolina is preparing for the release of their first album entitled 'Smokin' Voyages'.  The band goes by the moniker of Space Apaches, which immediately conjures up images of Steve Miller's 'Space Cowboy'.  And based on their reputation of having a lively sense of humor, it is entirely within the realm of possibility that the band's name is a tongue in cheek attempt to bill themselves as the anti-Space Cowboys. 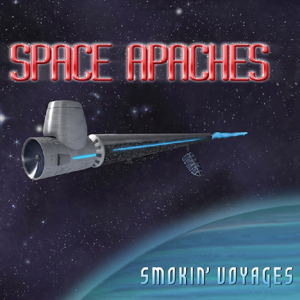 Space Apaches comprise Jim Arrendell on drums, Tom Leiner and Andrew Reed on guitars, Aaron Price on keyboards and guitar, and Rob Geisler on bass.  All five members exhibit excellent musicianship:  Arrendell's snare drum snaps with precision, while his timing is metronomic.  Leiner and Reed pluck their guitars with the aplomb and style of Dicky Betts, clean notes and effortless finger work.  The keyboards can only be described as sweet.  Price has the magic touch.  Geisler's bass thumps and bumps with ingenuous simplicity.

The band's music has been described as "kinda like a psychedelic Eagles with a sense of humor", and, while apt, the description is perhaps a tad too simplistic for there are vestiges of Tom Petty, Poco, Procol Harum and even Bob Dylan resonating through Space Apaches' sound.  Moreover, applying the term 'psychedelic' to their music is akin to labeling Led Zeppelin grunge rock.  If a label is necessary, Space Apaches would be more correctly designated 'happy, peppy country rock', and even that falls short of an effective description.

'Smokin' Voyages' contains fourteen tracks, which means it's a real album, not one of those half-assed, six-song wannabe albums.  Most of the tracks are original compositions with a smattering of covers tossed in.  Of the covers, the best is probably 'Just Dropped in to See What Condition My Condition is In'. Space Apaches' version definitely steers clear of Kenny Rogers' psychedelic rendering of the tune.  It's laid back with a distinct Southern California Poco-esque sensibility.  Space Apaches' version, gratifyingly, maintains the nerve-jangling but oh-so-necessary background vocals.

Another excellent cover on the album is 'Ghost Riders in the Sky', which opens with an elegant piano, then segues into a jazzy/rock-a-billy interpretation.  Guitars and female voices subsume the song, and the lead vocals carry a hint of Hank Williams, providing a charming balance.

Of the original tracks on 'Smokin' Voyages', the gift is 'Smile'; a tune about the triteness of celebrity culture and all its manifestations.  The lyrics of 'Smile' speak of the "Edie smile," a reference to the strange, empty and tragic life of Edie Sedgwick, the poster girl for the peaked and pinched void of the luminary lifestyle.  Still, despite its subject matter, the song emanates an odd tickle of emotion, centered somewhere in happiness.

'Smokin' Voyages' resounds with smooth textured energy, wonderful instrumentation and an almost palpable feeling of exhilaration.  Space Apaches have produced a superb album worth the price of admission.