Review of Twenty-six Single by Sosohuman 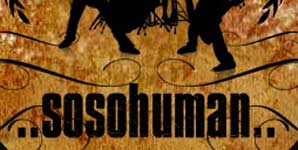 It's amazing to think that just three blokes can make so much rip roaring highly charged tunes. The question is could Sohohuman be the band that are added to the elite such as Nirvana and The Foo Fighters? It is however really hard to find a band that play such grunge, kerrang, Rock style, that actually use their vocals to complement the music and stay on the slippery slope of not screaming the lyrics out. Sosohuman are one of those few bands that manage this and it is this that puts them on the level away from your average grunge band.

Twenty-six is the new album to come from Sosohuman, but don't worry it's not twenty-six tracks long. No it is only ten, luckily otherwise it would be like watching The Lord Of The Rings trilogy all at once. The thing that might put you off without even hearing a chord is the track list, I mean with titles such as Wheelchair, Nanny and Threat Of Rain set the scene for an interesting encounter. Homeless has Earl capturing the pain and heartfelt lyrics deep in the pit of your stomach, the kind of sound that Kurt Cobain possessed, although unfortunately for the world Kurt's was real! This is followed on by the bizarrely named track Nanny, and well don't let the title full you. Nanny is Rocking out with guitar riffs and drumbeats that have the hairs on the back of your neck stand on end. It's like a cheap firework that has just beaten all expectations in one fail swoop.
Punisher is like a quick peep of what this band are all about and the track begins by luring you into a false sense of security. It starts with a mellow guitar and Earl softly starts singing, then it's back to normality as the drums sticks are struck together and the guitar riffs and drumbeats entwine into one!
The encounter of this album is not all good however and Threat Of Rain is a little less to be desired, and they obviously didn't get the title track while in the UK! Well you know there is never a threat of rain here, there is just rain! Anthem is the penultimate track and you can see this being a favourite on the live scene, as for being an actual anthem hmmm I'm not convinced.

Sosohuman have made something of a decent album, but is there still a market out there for this style of band? If there is then there shouldn't be too much of a problem for this trio.