Some By Sea - On Fire! (Igloo) Album Review

Review of On Fire! (Igloo) Album by Some By Sea

Some By Sea
On Fire! (Igloo)
Album Review 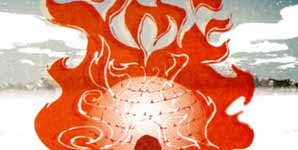 Possibly the album that has most underdelivered on expectations for me in 2006, On Fire! (Igloo) is the follow up to one of 2004's Albums of The Year, Get Off The Ground If You're Scared, where the band out Death Cab'ed Death Cab For Cutie, with an intelligent, indie melodic mix.

Here, however, they have upped the indie, with sideways glances and oh-so-hip nods to culture, but forgot to load in the melodies that made the predecessor so successful. When it is good (as on The Saddest Christmas or This Song Is Not About You, So Don't Ask), it is still gorgeous, like Clem Snide at their best, but elsewhere the album just seems to cruise along the runway without ever taking off.

Lyrically, the songs are wonderful - the CD liner could be read as a book of poetry - but they overwhelm to be the point that it seems the music was written later, rather as an afterthought, with the guys just regurgitating where they'd been before. This is still a nice album, but it doesn't build on such a promising debut.