When is a band not a band? Since when they're Soldiers of Fortune of course. Loosely assembled from members of American leftfield alumni outfits such as Oneida, Endless Boogie and Interpol, the Brooklyn sextet formed in 2004 under the guiding principals of being an anti-band, refusing to rehearse, write songs or play gigs. If that all sounds a little counter intuitive - nay hipsterish - then it's worth noting that for a long period of time after they did just that, only relenting in 2011 to deliver their début, Ball Strenth. 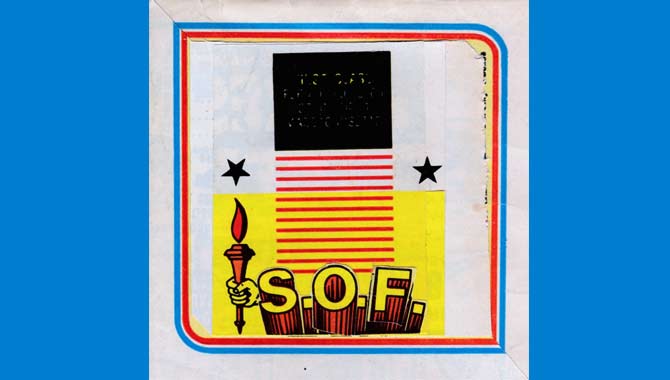 Men of principal then, and ones who on the basis of Early Risers are quite content to stay swimming firmly against the tide. Like it's predecessor their signature is rooted in the motifs of the largely unpopular mid-Seventies, predominantly the Highway glide of the West Coast and the Southern Fried licks of Skynryrd-esque blues-rock, an era of excess in both habit and song.

Over-elaboration however is not an accusation that could be levelled at them on the titular opener, a mass of testosterone riffing that splices the ghosts of Scott era AC/DC, punk and SOF frontman Brad Truax's personal obsession, Brit metallers UFO. This muscular brawling might cause some to point to a lack of finesse, but in truth nobody seems to be paying much attention to that on the unreconstructed shot-and-a-beer stomp of Kall Me Kaos or God Tooth Down's gutsy honk.

Where the story does get interesting though is where they split from their own program, relying less on their gut: here the claustrophobic, spoken word Santa Monica - stripped back desert rock and midnight blues - actually sounds like it was honed down from on the band's legendary eight hour jam sessions. For an underground concern that on the surface are ambivalent about the process of music, they equally have some pulling power in terms of Early Riser's guest singers, with former Pavement man Stephen Malkmus sounding uncharacteristically animated on the honky tonk of Campus Swager and the nomadic Cass McCoombs oozing detached weirdness on Old Roman Wall.

It could be that SOF and Truax have come to the realisation that by embracing at least some of the stuff which other artists can contribute they might become a going concern: it just as well may be that they decided to do work with people and release their music because they can. Either way on Cinnamon Man they make a superbly gifted racket, the song itself a hard luck story about a dependent relationship which burns and breaks up to a front ground of piquant far out-ness. Less together but containing surely one of the lines ever in "Said the cyborg/To the snail", the psychedelic closer Which is seemingly the creation of people who're taking much more pride in their work than their rep says they're supposed to, dissolving then building, a suitably interpretive ending to a record that occasionally threatens greatness but never quite sustains the aura. If they can be this intriguing whilst not really trying hard, a proper Soldiers of Fortune album might just be too good to miss.