So much has been made of Paul Thomas Anderson's documentary about the recording of Junun, the boundary-bending new album from Shye Ben Tzur, Jonny Greenwood and the Rajasthan Express, that the music itself has been somewhat forgotten, as though it were an accessory to the film rather than the other way around. That's a shame, because Junun is a joyful, vibrant record which blends disparate musical styles with results that are by turns boisterous, intimate and, at best, transcendent. 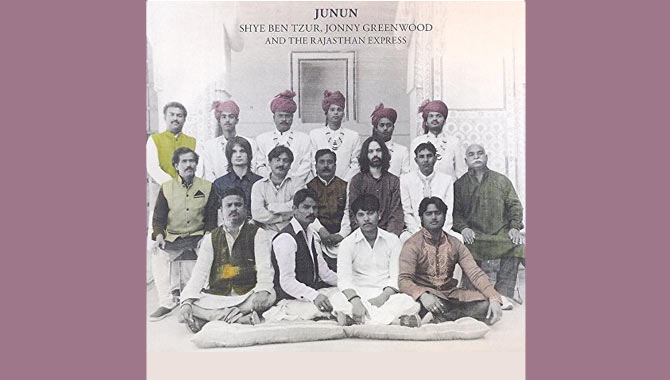 One look at Junun's contributors reveals just how diverse and unusual a project this is. Top billing goes to the Israeli musician Shye Ben Tzur, who is joined by Radiohead guitarist Greenwood and the Rajasthan Express, a hand-picked ensemble of 19 Rajasthani musicians from three disparate musical traditions: qawwali, a form of Sufi devotional music associated with frenzied states of religious ecstasy; traditional Manganiar court music; and the unique form of brass music which developed in India when instruments were left behind by British army bands. When this motley gang assembled to record the album, they did so in an appropriately barmy environment: the 15th century Mehrangarh Fort in Jodhpur, on the fringes of the Thar Desert.

It's apt for such a genre-straddling record that Junun's songs, written by Ben Tzur, are multilingual -Hebrew, Hindi and Urdu renderings of Sufi religious poetry. The trance-inducing properties of qawwali are immediately evident from the frenetic percussion which opens the title track, before it unfolds into a riotous affair of brass, harmonium and stop-start bass, the latter courtesy of Greenwood, the record's most famous contributor.

Despite Greenwood's involvement inevitably attracting a deluge of interest, his musical involvement is no more pronounced than that of the other musicians: he contributes drum programming along with longtime Radiohead producer Nigel Godrich, and convincingly apes his brother Colin on the bass - the only Radioheadesque flashes here lie in its stuttering low end. His ethereal ondes Martenot, meanwhile, crops up to atmospheric effect on the yearning, evocative 'Kalandar', and his trademark snaking guitar work is sporadic and ornamental rather than centre stage. The real stars of the show are the lively brass section, who bring such energy to the title track and its instrumental reprise, 'Junun Brass', that it sounds like they're about to burst through the speakers.

The modern recording studio is often described as an instrument in itself, and the same could be said of the fort in which Junun was recorded: Godrich rigged up an echo chamber to take advantage of the natural reverb, which enhances the sweeping, expansive sound of the music. Another quirk was the presence of the birds who call the fort home, and weren't going to shift for any internationally famous, floppy-haired guitarist - they're audible throughout the record, even getting thirty-odd seconds to themselves on penultimate track 'There Are Birds In the Echo Chamber'. Junun is joyous and life affirming, infused with the same spirit of inclusiveness and syncretism as the Indian environment in which it was created. You may not recognise the words, but this record is delivered in a language everyone can understand.