Shura's back story is one of the most precisely 21st century ones you have to look twice at it: child of a Russian mother and English father, she began writing songs at an early age but was courted to be a footballer in her native town of Manchester. Eventually at 16 she decided that the physical demands of the game were too much and via a DJ brother she was introduced to clubbing and the wildness of the underground: latterly she came out. 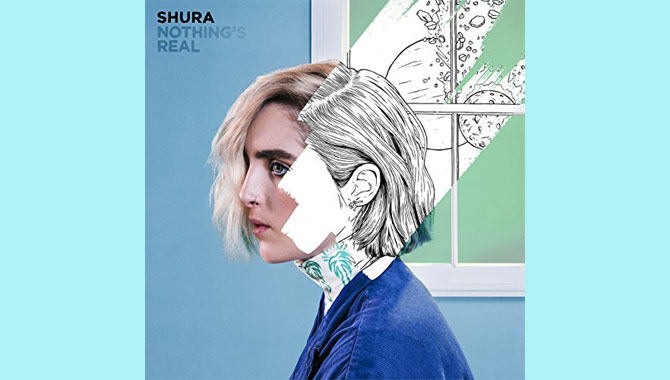 This makes it even more remarkable when you consider that Nothing's Real is a fastidious-to-perfection act of regression, of processing the vagaries of modern life through the filters of synth pop's mostly limited substance. It goes without saying that this is an ever more choked field, one clogged with artists for whom the last century's naiveté and hyper extended romanticism are articles of faith. That Shura - real name Alexandra Lilah Denton -   has taken this increasingly jaded pretext and made a truly great record from its well-known pros and cons is an act of reinvigoration which should be celebrated from wherever stuff is celebrated from in this fractious new world.

One of the few people to use her long list nomination for the 2015 BBC Sound of...as a cue and not a blunt marketing instrument, we already had the woozy post r&b of Touch to anchor with, a gently spinning post break up song that lyrically fessed up all the contrasting emotions of joy and memory; we've all been there, but this was a song that spoke with the honesty of a confession.

Intimacy is part of pop's DNA: its primacy one of the facets which help its connection to the public. Nothing's Real is bookended by two instrumentals - the found sounds and stasis of opener (I) and it's much longer counterpart The Space Tapes, a bricolage of me-mixes taking in DJ Shadow-esque hip-hop breaks, meadow ambience and spy theme ephemera.  Away from these indulgences Denton hits a vein of adrenaline so pure it's almost impossible to take your ears away from it, most obviously decanting the sass and recherché innocence of True Blue era Madonna.

In more than one sense this ability to emote in practice, combined with some exquisite programming, elevates the best moments here to masterpieces of instinctive purity: 2Shy's soulful brio is as delicate as it's yearning, Kidz n' Stuff so equally slight and as much about its space than texture, whilst the diva of What's It Gonna Be flips from tentative to sure-footed, a pulsing confidence like an elevated heartbeat.

Whilst anyone's sexuality is never really the point, Nothing's Real echoes the vibrancy and colour  of Years & Years début; both records about love, loss, jealousy and resolve and both by openly gay artists unafraid to salute the aesthetics of people music from A to Z. Nowhere is that more explicitly heard than on Indecision, a waterfall of synths, insouciantly fileted guitar and clipped, breathy vocals which pick out the clear, clean message like a series of nursery rhymes for (Almost) grown ups.

This is Shura's gift: making the listener feel like they're somewhere they've never seen, with someone that they can never touch, but identify with both through just the medium of words and sound. Intuitive, this may be a temporary gift, or a long-standing one. The curse of sophistication may well rob her from us, but for now Saturday afternoon's loss is most definitely our gain.