Review of Self-titled Album by Sholi 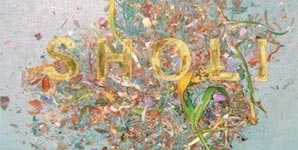 Sholi's debut album has been a few years in conception, production and development, it's been produced by Deerhoofs Greg Saunier and is on Quarterstick a sub label of Touch and Go Records, with the likes of Quasi, Mi Ami, TV on the Radio, Yeah Yeah Yeahs, Blonde Redhead and CocoRosie. Sholi are Payam Bavafa on vocals and guitar, Jonathon Bafus on drums, Eric Rudd on bass and vocals, and Greg Hagal on keyboards and percussion. Now reading the promo information that came with this album, in all honesty it sounds a little like the 'concepts' for the album could outweigh the quality. The preamble about the album littered with pretentious references to their music in a dualistic manner and then on the inside of the actual album we get more creative drivel about their intent. Having been a performing arts student myself as well as a have-a-go musician this sort of talk about art or music drives me up the wall. I know that its all about promotion but I'm not sure that the average music lover cares about this sort of bollocks and it only serves to taint the listening experience because it sets you up to expect something exceptional. So after all the hype, was the album as big as their talk?

There is no doubt that talented musicians have created this album and there is no doubt that they are inventive and artistic in their approach. There are some early 90's Indie rock sounds going on, certain bits where slightly Stone Roses esq and 'Any Other God' has a Manchester sound to it despite them being Californian. The drumming from Jonathon Bafus is very good indeed, lovely little jazz fills and ripples, steady and hard rock drumming and beautifully gentle carry you along rhythms, arguably he carries each track, which I suppose a good drummer should do. It would be fair to draw comparisons to John Stainer, the Battles drummer, in the sounds that Bafus has aimed for but time will tell on his true comparability. 'Out Of Orbit' has a Black Keys gritty guitar sound, same sort of edgy rock resonance found on 'Attack and Release' with a nice use of dynamics to boot. It's certainly not dreadful to listen too. The things I like about this album is the ease of listening that it gives. It is fair to say that it is straightforward and accessible but also a little further out of the mainstream.

Unfortunately, I just don't think it's as creative or inspirational as the hype. Lots of great bands out there are doing what Sholi are doing now. I'm not sure if Sholi are going to be as big in 2009 as the hype would claim but it's a good solid effort and definitely a decent debut, not likely to be the best album of the year but Sholi are ones to watch for the future.