Shack - Tie Me Down Single Review

Review of Tie Me Down Single by Shack 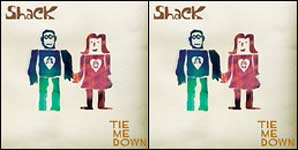 Professional scousers Shack seem likely to be known as the perennial support act for every up and coming artist since forming at the back end of the eighties. Back then you would have caught them opening for the likes of The Las, now they seem to crop up on every Oasis tour at one town or another.

Obviously the Noel Gallagher endorsement has been of some use to them as if it wasn't for him and his Sour Mash plaything, the Head brothers probably wouldn't have an outlet to distribute their music.

And what of the music? Well, if you've heard one Shack record from the past five years its fair to say you'd may as well heard them all. Mick Head does tell a good tale from time to time (see 1999's 'HMS Fable' for a host of them) but after a while Liverpudlian toned whingeing and acoustic guitars become tiresome and sadly for them, the likes of The Zutons, The Coral and the Dead 60s have taken the trad-rock sounds of Merseyside to a new level. And for Shack, it seems underachievement may as well be their middle name.