For those not familiar with Anticon, and artists like Doseone, Sage Francis, Sole and the recently sadly departed Eyedea, the premise of 'intelligent hip-hop' may seem unnecessary and unwelcome but the loose, and admittedly mostly redundant, demi-genre has been the home of some of the most vibrant and vital beat-driven music of the last decade. Perhaps inevitably, it has also been home to some of the most self-centered and pretentious and unfortunately Chicago Illinois' Serengeti's 'Family & Friends', his debot solo album on Anticon Records, falls closer to the latter than the former. 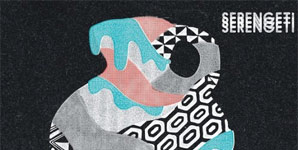 Things start off promisingly enough. 'Tracks' rides on a slow n' simple beat that sits in the middle distance between guitars with a middle-eastern vibe and carhorn samples, with Serengeti meditating on the loss of a relationship dragged at a snails pace into oblivion. An opening couplet of "Scary, look at the monster you married, you never really know someone until you're both buried" sets the tone for not only for the song but the album as a whole. Yet the overriding theme of loneliness and loss is rarely illustrated as succinctly or with as much gravitas after it.

The landscapes on which Serengeti places his raps rarely hit the same mark as the opener either. 'PMDD' creates an interesting contrast with the use of the main melody from Ben E King's 'Stand By Me' to lay down a tale of an undying love for a prescription pill addict, but even as early on as the albums' second track his refusal to break the rhyme begins to grate, and this grating increases tenfold on the follow-up 'Long Ears', with the introduction line "Guess whose back? Your old broken down dad. Came back to say he loves you, and that he feels bad" sounding particularly cringeworthy and almost reaching Brian Molko-esque levels of coupling.

The further Serengeti strays from his own formula the better the end result. The warm, glittering synths of 'A.R.P', and the bouncing drum loop that makes an entrance at the close of the track, which half-bury his raps are a highlight, bringing to mind Sage Francis or Subtitle at his least difficult.

The stand-out track however is 'The Whip', which at almost double the length of the rest of the albums tracks still drags a lot less than more than half of them. It tells the story of Gary 'The Whip' Moore, a fictional UFC fighter to ask questions about missed opportunities, using the analogy of a fighter in a similar way to Mark Kozelek on 'Ghosts Of The Great Highway', seeing a lone fighter inside of him.

Still, for the most part 'Family And Friends' drifts between the insipid and the infuriating, particularly with regards to the albums (sparse) highlights and is somewhat of a lowpoint in the Anticon catalogue.