After spending more than a decade as one half of Slow Club, Rebecca Taylor has cast aside the shackles of a collaborative partnership to pursue her very own musical direction. Starting in 2017 with her break out single 'Your Wife' and through to her recently released debut album 'Compliments Please', Rebecca (Don't call her Becky, you might get a rude retort!) has redefined her sound without the need to compromise. 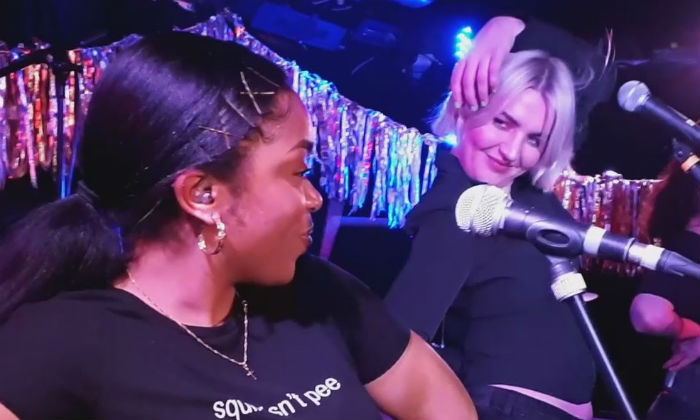 At the end of a week that's not only seen her album garner much critical acclaim, as well as an 'Album of the Day' feature on BBC 6 Music, Rebecca, under her new moniker of Self Esteem, also started her latest tour. The first date found her at Ramsgate Music Hall, a one time winner of Independent Venue Of The Year, and a champion of new music.

On the South East coast, way back from the seafront and away from the busier main streets of Ramsgate's town and harbour, aside a taxi firm and overlooking a bleak car park, the Music Hall stands like a musical rose among the thorns. The intimate, and certainly unique, venue has played host to many great bands over the years and tonight was no exception.

Opening for Self Esteem was RVBY (Bristolian Ruby Donadel). In her pale pink mechanics suit and white pumps, the 19-year-old with the tidy blonde bob charmed the ever-growing audience with her blend of razor sharp pop. With a pitch perfect vocal, RVBY played out her only single to date, 'L.O,V.E', gave us an energised 'Electric Dreams' (Her own, not Moroder's), invited people to "have a boogie" before the rather livelier 'Dancing With The Moon', and closed out her set completely stripped back. Confident, composed and in control, RVBY looked the part and sounded like she would not be playing support slots for long. File this one under 'Ones To Watch'.

Self Esteem - for tonight's performance a five-piece band comprising Rebecca, two backing singers, a drummer and bassist-cum-keyboard/guitar player and vocalist - were clearly excited to be starting their tour. Everyone aside from Rebecca wore matching black T-shirts, the content of which you may see pixelated if it were on the TV! With her black outfit and co-ordinated platinum blonde hair and boots, Taylor looked every inch the star of the show.

The hour-long set was headed up by the charged frustration and reflection lived out through the quite brilliant 'Rollout'. You could hear the obvious connection to the lyrics that Taylor was imparting with controlled passion as she and her band sang: "What I might have achieved, if I wasn't trying to please". The vocal harmonies from the four female voices were at times breathtaking. Rebecca occasionally checked in with her band to make sure that they were OK. "Do you think Rita Ora does this?" she joked before deciding to alter the sequence of the setlist.

Last year's summer release, 'Wrestling', was another early highlight. The electro-infused, slightly funkier, sound gave rise to a more soulful and sultry performance from Self Esteem. With Taylor and her two backing singers front of stage there was also a subtle but effective choreography of movement to accompany each track. The Eastern-influenced soundtrack to 'Girl Crush' backed more sublime vocal dexterity from the group as they captivated the packed crowd, and the percussive backdrop to 'Your Wife' worked wonderfully with its well balanced harmonies.

'She Reigns' ("Like a Queen, or a King; we're all inclusive here") was another song that served to highlight the overall quality of Self Esteem's debut album. Rebecca's vocal was a joy to behold, here and throughout the night. Her range, soulful delivery and emotive performance ensured that each song was showcased in its best light. Wearing her heart on her sleeve through her very personal, and at times biting lyrics, Taylor didn't hold back. She did joke that they'd got "so many" songs as if she were playing to people who weren't interested in hearing them, but she needn't have worried as the whole of the Music Hall was transfixed by her performance.

As the evening drew to a close, Taylor and her band had literally saved the best to last. With a tongue-in-cheek flagging up of the "last track", Rebecca and the band delivered an electrifying version of 'The Best' before taking enough enthusiastic applause to announce that, "Oh, OK, we'll play two more". As Rebecca prepared the band for the penultimate track, there was a brief hiccup (One of the backing singers went rogue) before they were all on board with going completely acoustic. As Self Esteem started to sing as one, you may have been forgiven for thinking you were in church. The crisp harmonised vocals of 'I'm Shy' made the hairs on your arm stand on end. It was an angelic performance with nowhere, but no need, to hide. The performance was quite stunning. The lyrically poignant 'Favourite Problem' served as the actual finale before Rebecca invited everyone to join her and the band for a drink at the bar.

In the intimate venue, playing to a select few, Self Esteem had kicked off their tour in style. Their set was wonderful, highlighting not only the great songwriting and fantastic arrangements but also, and above all, the quite stupefying vocal performance from Rebecca Taylor.