Review of Who's A Terrorist Now? Single by Scully

Scully
"Who's A Terrorist Now?" 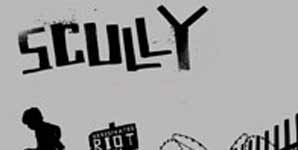 Having recorded their first album with producer Ben Hillier in Scarborough, Scully release this, their debut single, as a taster. Named after vocalist and guitarist Daniel Scully, the trio cite the likes of The Sex Pistols and The Jam as influences.

Written about an incident in which their frontman was stabbed, "Who's A Terrorist Now?" is a stomping mid-pace rocker with underlying punk tones. It never manages to rise above mediocrity, but the lyrics at least are amusing. The B-side "In Good Time" is also less than spectacular, with a blend of punk and ska that doesn't have great chemistry.