In this day and age, where most electronic music is created on computers, one might question the future of synth-pop. Luckily, there are still artists, like Scraps, that are proving synth-pop isn't dead with great records like this one, where the synthesizer remains the predominant instrument throughout. 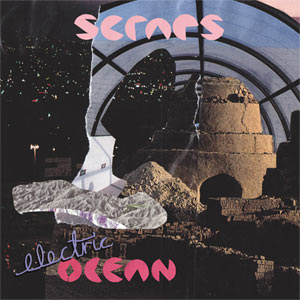 'Mushroom Gods' opens 'Electric Ocean' with a sense of warmth and melancholy alongside delicate and dreamy vocals. Instrumental 'Lonely Motorbike' is more unsteady and has a strange, 90s Nintendo video game soundtrack feel to it (the 8-bit kind if you will) that gets even more thrillingly shaky as the song goes on. The title track is quite possibly the best song on the album and sets up a romantic atmosphere from the start with minimal but drawn out high keys. The lyrics add to this with sentimental imagery, and example being, "We are jumping on a trampoline, up and down, up and down, sending telegraphs in a dream". The chorus further cements this song as the stand-out number with an uplifting and memorable synth-line. 'Projections' feels like more of a disco tune with its four to the floor beat and glittering keys. It's not hard to imagine seeing people losing themselves and having a blast dancing to it if it came on in a club.

The album is by no means perfect, however. 'Sapphire Plaza' and 'Asleep' are a tad bland and they go over your head to the extent that you completely stop paying attention. Unfortunately, they also happen to be the two longest songs on the album with the former coming in at 6:03, and the latter at 5:40). This could just be bad luck but, for now, Scraps are probably best keeping things short and sweet. 'Flying' and 'Holiday' are good demonstrations, both lasting under two minutes. 'Flying' is an affectionate and uplifting romp while 'Holiday' has a filthy dance club beat with childlike vocals which prevent it from being too run of the mill. Lengthy, not-so-good songs aside, this album is that little bit more inventive than your average synth-pop album.

Electric Ocean doesn't reinvent the synth-pop wheel nor does it stray too far from the genre, but it satisfies all the needs of a synth-pop fan and then some. It's fun, danceable, pretty, charming, and with tunes to suit all moods. If you like synths, this is probably your sort of thing.