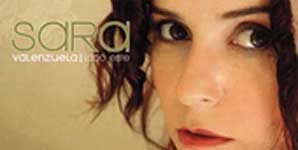 In the nineties, Mexican singer Sara Valenzuela made a name for herself fronting the alternative rock pioneering group, La Dosis. The funk-based alternative outfit recorded a handful of albums for Sony, but, sensing a need for a change in direction, Valenzuela ultimately left the group. However, the ensuing hiatus was short lived and upon her return, Valenzuela sought not to rediscover her musical inclinations, but rather to redefine them.

Valenzuela's musical soul searching resulted in the album "Lado Este". The album, originally released in Mexico in 2004, has won her many admirers among music fans and critics alike. After its domestic release, the album consistently appeared in music critics' top ten choices for 2005.

"Lado Este" offers a virtual snapshot of the sum of Valenzuela's musical development. She recalls being reared on a musical diet of funk, soul, rock, classical and folklorico. By the age of ten, she was taking voice and guitar lessons and soon after began penning original compositions. Her first stage experiences came by way of appearances in musicals and dance productions.

The music on "Lado Este" is an ultra-smooth but complex blend of Latin adult alternative and sultry pop seductiveness. Slowed up tempos and electronic percussion provide a base over which she paints folk guitar, trip-hop hypnotics and an overall eccentricity; the result of once again writing her own songs.

"It was very interesting and exciting to sit down with my guitar and see what came out," Valenzuela told www.contactmusic.com recently from her home in Guadalajara. "I never quit music; I just wanted to see what else I could do. I was eager to discover my own new direction," added Valenzuela.

"It was a real honor to not only play with such great musicians like Marc and Melvin, but to also have it culminate with recording in what I consider one the world's major music capitals, New York, was a dream come true," said Valenzuela.

While Valenzuela continued to follow her instincts and ride the wave of creative momentum, she was unprepared for the harsh realities that often face independent artists. She shopped the disc to a number of record companies, but was met with cool responses time after time.

"At first, it was like the thing was a hot potato. They'd say it wasn't marketable. And if your music isn't deemed marketable, then you can forget it," said Valenzuela.

After its initial exclusive Mexican release, "Lado Este," was released in the U.S. by Tomas Cookman's Nacional Records.

"It's just a beautiful record. We've been fans of Sara's since her days with La Dosis and when this disc came out, we thought it was a complete shame she didn't have a recording contract. The music is fantastic; the guests on it are fantastic. We just thought it had to come out." said Josh Norek, Vice President of Business Affairs & Media Relations
at Nacional Records/Cookman International.