Review of Pull The Strings Album by Sandy Dillon 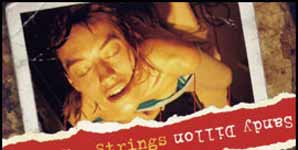 When trying to get to know a bi more about Sandy Dillon, I found out that while doing her current album she was fighting against cervical cancer and MRSA. So after hearing about this fact and I torn to being a bit more sympathetic? Well no I need to judge the album, on the album and not the reasons behind it, if I did then the Streets would keep getting great reviews for music that just keep descending further into oblivion.

I must admit that 'Pull The Strings' took me a couple of tries to listen to it all and is all together the scariest record I have listened to in my life!!! To me she sounds like across between Cerys Matthews and Macy Gray (scary though in it's self) with the music influences of Bjork. Somehow there are many dark places in this ladies mind and she has put it upon herself to share it with the rest of us. Personally I think I need counselling after that, but I am sure that it might connect with people out there who are thinking that she has hit the nail on the head. Some of the tracks just explain themselves to the insight of this album. Tracks such as Homesick, Broken Promises and Motherless Children.

Don't think that I am being negative just for the hell of it, or because I can. Some people out there might love; the record label must of for a start. The beauty about music is one person's pollution to the ears is another's escape and tranquillity (or just general rock out).