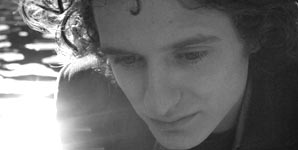 Rob Sharples is an acoustic singer/songwriter who is causing quite a stir on the music circuit at the moment, not to mention behind the scenes with the industry big-shots.
He has been likened to Nick Drake and John Martyn; however, unlike others who have gained this praise unjustly, Rob, although only 23, already has a phenomenal guitar technique that is delighting both fellow musicians and music lovers alike.
His songs are beautifully crafted, and at his best he seems able to create haunting tunes that give real promise he could one day write songs as timeless as that of his influences.

The Vic is pretty much your regular drinking establishment. Its clientele seems to be predominantly men, something that is reiterated by the male loos which are plastered with posters of topless women. Nevertheless, the atmosphere seems quite friendly and the place begun to fill up with punters who generally seemed quite excited about the prospect of live music.

The support act, Leander Morales and his impressive lead guitarist Jon Watts, got the crowd, who were clearly enjoying themselves, pretty worked up. They even started whistling and singing along, one guy shouting 'you're not bad mate!' during their third song. I started to wonder whether this kind of crowd was going to take to Rob's brand of subtle, tender song-writing. Rob himself, it has to be said, looked a little anxious.

After the interval Rob settled himself, a little uncomfortably, onto a tall stool in the corner of the room. He looked young, and small in frame with light, tightly curled hair. Without looking towards the audience he set up one of his two acoustic guitars and rested it onto his lap, strumming it a few times to check the sound. Both guitars were pre-tweaked into the complex tunings he has become well known for on his local circuit.
A little surprisingly, the crowd quieted down as he muttered a slightly nervous 'hello' and without another word, begun to play.

He opened the set with a delicate and quietly uplifting song, his voice both whispering and soaring through the melody. It was his guitar playing that first caught my attention, a rhythmic finger- picking style that was as unpredictable in melody as it was complex. His voice was very gentle and heartfelt, and I wasn't able to place its likeness in any other artist, something I find is all too easy these days.

The set continued with the crowd generally being quite responsive and applauding loudly. A few people moved nearer to watch his guitar playing more closely and were muttering and nodding to each other as they did so. Unfortunately it was difficult to maintain the hush during the few minutes between each song where Rob changed the tuning of his guitar, and the crowd got slightly louder throughout the set. One thing I did feel was that it was difficult to hear the lyrics, which was a shame, as the ones I did make out were both original and intelligent.

I found myself absorbed in his songs, each different from the next, although a few did stand out immediately as being the more mature and well-constructed. It seemed like a very short 45 minute set and after Rob announced that this would be his 'last song', (some of the few words he said to the audience throughout, although he always smiled and kept apologising for having to change tunings), the crowd called for an encore and clapped loudly.

Rob ended the set by doing an (almost) perfect rendition of the extremely difficult song Seven Black Roses by John Martyn, which, to the surprise of some of his musical onlookers, included him moving the capo up and down the frets with his left hand while still playing the strings with his right. It ended to rapturous cheering and whistles for more as he stepped off the stage saying humbly, 'I have no more songs!'

All in all a very impressive gig in a venue that perhaps wasn't best suited.
I hope people are able to see Rob somewhere his music can fully be heard and appreciated, as I feel he is definitely an artist to watch in the future with real potential and talent. I, certainly, will be spreading the word.