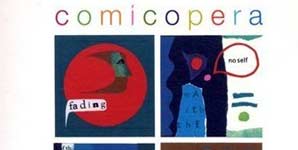 There are very few superlatives still left to write about Robert Wyatt. He's never going to sell boatloads of records, and the chances of him having another hit as big as 'Shipbuilding' are remote to say the least. But he is a genuine great, making idiosyncratic, eccentric, funny, poignant albums that are always well received and are worth going back to over and over again. And 'Comicopera' is no exception. 'Conducted' by Brian Eno, it's conceived in three acts and spans sixteen tracks. Largely recorded at Wyatt's home in Louth, Lincolnshire, and Phil Manzanera's Gallery Studio (although the final track was somewhat incongruously recorded in Padua), it's pretty much what one might expect of Wyatt: the sound of a man pursuing his own wilfully perverse course, refusing to grow up, and cocking a well-aimed snook or two as he goes.

Act One, 'Lost In Noise', opens with 'Stay Tuned', which sees Wyatt's curiously fragile yet hugely distinctive voice entreating us to stay tuned if we're still there - 'there is more to come'. There's some lush brass and woodwind harmonies, and a descending piano part that sets just the right atmosphere of gloom, nicely added to by a wordless female backing vocal. 'Just As You Are' is an almost impossibly simple love song that's honest, touching and everything a heartfelt love song should be. It features a positively dreamy trumpet and a gorgeous vocal melody. There's a deliciously subtle guitar solo in there too. The tenderness between Wyatt and his partner Alfie (they share vocal duties) is tangible. Beautiful stuff. 'You You' features more rather fetching brass over a very odd percussive backing. Wyatt's voice hovers above this; it could crash to earth at any time, yet stays airborne purely by strength of will, it seems. There's saxophones and a clarinet in there, plus a very skinny bass that ticks and tocks underneath everything like a pulse. Atmospheric? You bet. 'AWOL' begins with more trumpet and plucked upright bass, and features my favourite lyric of the whole album. It's the tale of Hattie, who lives alone in the attic, 'her feet rarely touching the gound / Haunted by waltzes with Harry / Harry's hat hanging here in the hall'. Later we discover that Hattie has nothing to trust, 'just the tick and the tock of the damnable clock / As the world that she knows turns to dust'. We leave Hattie in her attic, 'thinking in riddles' and 'waving to trains that no longer run'. Sad but achingly beautiful. 'Anachronist' rounds off Act One, all strange, ethereal (and typically Wyatt) harmonies produced by brass, woodwind and voice. There's a cheeky electric piano in there as well and a walking bassline as things coalesce into a stroll in the sun. You could call it jazz if you had a mind to. Blimey.

Act Two, 'The Here And The Now', begins with 'A Beautiful Peace'. 'Oh look', says Wyatt, 'There's a dead rabbit, all flat'. He then describes the litter lying in the gutter, before singing about all the things he's seen on his travels that morning. It's all very small-town centre, but the minutiae are beautifully observed: takeaways, estate agents, the Methodist hall. And the pay-off's great: 'It's a beautiful day ... but not here'. 'Be Serious' begins with Wyatt claiming 'I really envy Christians, I envy Muslims too'. It's the certainty he's jealous of, apparently. A jazzy guitar in the background accompanies Wyatt's musings on not having that fundamental life-guiding belief. 'Be Serious'? Oh, go on then. I will if you will. 'On The Town Square' is all drums and lo-fi guitar with brass punctuation before a steel band and a saxophone take over for a happy-go-lucky instrumental five-and-a-half minutes or so.

'Mob Rule' takes a swipe at town planners, seemingly (the lyrics are a little hard for these ears to decipher), while 'A Beautiful War' and 'Out Of The Blue' are companion pieces looking at a Middle East bombing raid from each side of the coin. 'It's a beautiful day / For a daring raid' sings Wyatt against a jaunty backing with a hint of military fanfare. This song is sung from the pilot's point of view, and there's a kind of child-like pride in the pilot's achievements, which he'll be able to watch on film in a couple of days. Plus, of course, we'll all be free. 'Out Of The Blue' is a whole lot uglier - but then the reality of bombing is, right?. 'Something unbelievable has happened to the floor', sings Wyatt, against a dark, brooding backing. He then describes how the house has been blown apart, but 'you've set me free' and 'you have planted all your everlasting hatred in my heart'. Powerful stuff.

'Del Mondo' opens Act Three, 'Away With The Fairies'. It's hard for me to comment on the lyrics, because they appear to be in Italian, a language which sadly I don't speak. There's some lovely, woody synth sounds, though, and some neatly judged pizzicato strings. 'Cancion de Julieta' might be in Spanish - certainly the trumpets sound like they might be - and I find myself being a bit miffed that I never learned more languages. The music's great, though - strings buzz like flies in a heat haze and a double bass lurks around in the shadows. 'Pastafari' is mostly glockenspiel (I think), steel drums and other things that are hit with hammers, but at least I don't have to worry about lyrics, because it's instrumental. It's perhaps the most 'jazz' piece on the record, but don't let that put you off. 'Fragment' is a minute and half of backwards sampled noises - I've never been great at identifying things that are played backwards, but it's one of the other tracks on the album, I promise. 'Hasta Siempre Comandante' again seems to be in Spanish and features some lovely chromatic Latin-style piano.

This really is one hell of a record. In turns it is tender, poignant, angry, beautiful, pointed, oblique and many other things. It was also recorded pretty much live, which is a stunt in itself. I only wish I was more of a polyglot so I could get the best out of the third act. Wyatt has proved again (as if he needed to) that he's a national treasure. We should celebrate him while we still have him.