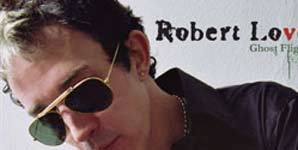 Robert Love is set to release his first solo effort, which in all honesty bears to the side of Country and at times I would say Preacher. For me this is the kind of stuff that should not be clogging up the shelves at HMV or Virgin. The kind of stuff that you find in the buckets at Macro at 3 Cds for a fiver. Harsh you might say, I say harsh, but fair!!

Anyway Robert Lowe sounds like someone that has been on the fags and booze for the last twenty years. I mean there is the gravel sounding voice like Rod Stewart's and then there is this! This is one that I feel does not complement any of the music at all and that to me is a big worry. I can't state enough how self inflicted his vocals sound.
The first track of the album really just sets you up to feeling this is going to be a long listen, musically it is not bad at all. Lyrically the state of making sense has totally been thrown out of the window (a bit like some of my reviews, yeah you were thinking it, so I got in there first). I will say that later on in the track that, has some cracking piano chords so Mr Clifford Slapper I applaud you for your piano skills and your funny surname. Finally we meet the penultimate track, a cover of the man himself Mr Bob Dylan 'Tryin' To Get To Heaven'. There are some tracks that you just do not touch, take that U2 and Mary J Bilge version of 'One' awful and that is the same with Robert's cover.

It can be said that Bob Dylan must be one of Robert Love's influence and at the time when Bob Dylan was big, this would have been good for him. In today's climate with this style of music a real big track that will get everyone hooked. Unfortunately for Mr Love, he does not have this and it is hard to follow a genius such as Bob Dylan. Not the best to be quite honest, and I wouldn't go out me way to get the album.