Review of Viewpoint EP by Roam

After signing with Hopeless Records last year, UK band ROAM put out their third EP 'Viewpoint' late last month. ROAM is a five-piece from Eastbourne, South England whose style draws upon pop-punk acts of the late noughties like The Story So Far and Man Overboard. 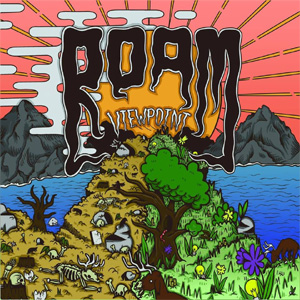 In recent years, we've seen more and more bands popping up to play with this particular format. For such a distinctly Americanised sub-genre, it is not overly common for these bands to be British, however Welsh band Neck Deep (who ROAM have toured with) have gained a considerable following in these circles recently, a success which ROAM seem to be aiming for too.

Second track 'Warning Sign' had a single release late last year and features vaguely personal lyrics about hoping for better things and moving on from the crappier things that have come before. '519' is the EP's shortest track at only a minute and half, although there's still plenty of chanting; 'I don't wanna be taking down the pictures in my head/ I don't wanna see another chapter of our book left out unread." Final track 'Safeguard' sees the EP out on optimistic terms and even features sections of quiet solo guitar melodies.

Within the context of pop-punk, 'Viewpoint''s formula ticks all the typical boxes; lyrics about dealing with relationships and growing up are sung loudly over angry pop guitar melodies and speedy punk-style drumming. Videos even feature bedroom show bro-downs with underage kids pretending to know all the words. These are current staples of a sub-genre almost exclusively focused on teenage sentiment and a closeness to puberty that's soothed only by road trips and a nostalgia for 'Enema Of The State'.

Unfortunately though, outside of this context ROAM have very little to offer that could be considered either groundbreaking or new. This is not necessarily anything to do with pop-punk's twee aesthetic - many other bands use this formula in less rigid ways; Modern Baseball and You Blew It! are two bands whose synthesis of these elements with those of indie-rock and emo makes for music that's less abrasively juvenile and not so exclusive to the apostles of a very insular scene. Even Knuckle Puck and Moose Blood (whose musicality sits closer to that of bands like ROAM) use pop-punk ingredients creatively to make their own kind of sound within this area. But on 'Viewpoints', ROAM seem to be simply lifting their musicality from that of their pop-punk-peers (The Wonder Years, Real Friends) which can make the EP feel both tiresome and awkward.

No doubt 'Viewpoint' will win ROAM more fans, although my prediction is that those people are likely to be from within the parochial crowds of Slam-Dunk goers and Kerrang readers that these boys belong to already. However, if you're someone who likes pop-punk but struggle with it's more embarrassing qualities, you may need to keep looking.