Retox have been one of the more exciting bands in punk/hardcore over the last few years with records like 'Ugly Animals' and 'YPLL' that may be joyless, but have plenty of fight in them with a bitter socio-political message pointing out society's ills. Newest release 'Beneath California' came out a few months ago which we praised in a 4.5/5 review for continuing Retox's nature for shaking things up. They do this with thrilling but well thought out riffs, relentless rhythms and a high level of hostility that few in the scene are matching. Now they've shown their importance on a stage too. 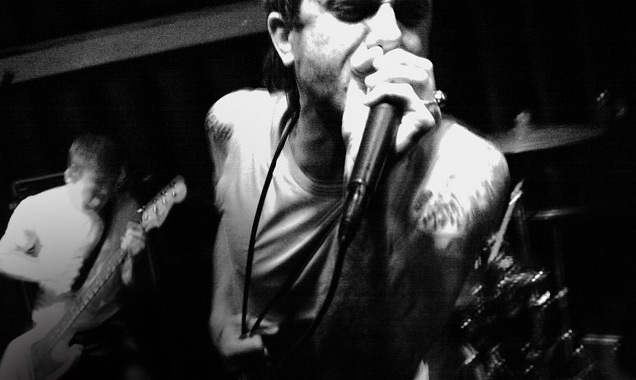 First up were French duo Warsawwarsaw who delivered ear-splitting grindcore with all over the place unforgiving drums and screeching, ultra-fast guitar. Their sound was fierce and whet the appetites of everyone in the venue for a night of aggressive music.

Next were local noiseniks Blacklisters with their psychotic noise rock, raw devilish riffs and menacing stage presence. Frontman Billy stumbled across the front row as though drunk, while shrieking indistinguishable words into the mic.

Retox were a set of flailing bodies the second a drum clack sounded, setting off the short but severe 'Die In Your Own Cathedral' which left audience members feeling like they've been punched a hundred times in a minute with clattering instrumentation. There's a venom to Retox's songs which fuelled the members to be the uncaged animals they are for the rest of the show. Frontman Justin Pearson swung his mic, shook around the stage and kicked over an amp declaring "those things are overrated". Michael Crain was constantly in motion with his guitar going up and down, left and right as he played. It was even thrilling to watch Brian Evans hammer away behind the kit. Just like their sound, Retox's live presence is fury embodied.

The crowd, of course, also couldn't help but get a little rowdy and Crain even went into the crowd to ignite a pit himself, not caring who his guitar hits. It's hard not lose yourself in songs like 'This Should Hurt A Little Bit' for all their speed and franticness, made by wirey guitar noodles juxtaposing firm blows. That said, the slower, more time biding 'Let's Not Keep In Touch' struck something just as much in the crowd as they were enveloped by the stinging high chords, headbanging to the concrete low stabs.

For the last few songs emerged one VERY sassy dancer at the front. Pearson gave the audience a choice of "just stand there drinking your pints or whatever" or "you can follow this girl's lead". The crowd took to Pearson's challenge and made the Brudenell's floor a slam dancing warzone. It's always nice when a crowd member elevates the show. Sure, it's only the bands being reviewed here, but it's part of the magic of a punk show like this that everyone counts. Plus, it's a joy see 70 plus people just completely lose themselves in each other through the art of moshing. Another beautiful thing about this punk show, it was soundtracked by closing ragers 'Mature Science' and 'Consider The Scab Already Picked'.

A solid show from Retox that showed you can have a good time in apocalyptic music. Retox themselves were very lively from start to finish and even though it took the help of one excitable person to get things going really crazy, there was still a sense of frenzy throughout the whole show, driven by Retox's severe sound and attitude. Embrace the destruction, embrace Retox.