Review of Beneath California Album by Retox

Fronted by noise legend Justin Pearson (The Locust, Some Girls, Head Wound City, Swing Kids, All Leather), Retox were always bound to be aggression gold and they've proven to be just that on 2011 debut 'Ugly Animals' and 2013's 'YPLL'. These records are moody but feisty and, most of all, exhilarating with Michael Crain's haywire guitar style and Pearson's venomous vocals, not to mention desolate lyrics pointing out all of society's ills. 'YPLL' was a step up from 'Ugly Animals' with more hooks, but equal harshness and they've taken it up another notch with newest full length 'Beneath California'. 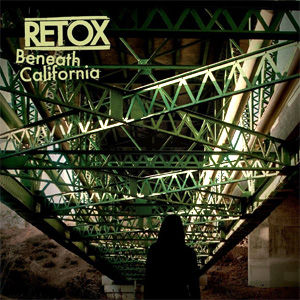 Starting off with 'Die In Your Own Cathedral', this is probably Retox's most battering song yet, clocking in at 52 seconds and being filled with drums that evoke a cartoon image of being repeatedly slapped at an impossible speed. However, the tingly guitar noodling and more robust, but short, riffs make for a memorable beating. 'We Know Who's The P***k' isn't quite as punishing, but no less thrilling with lots of high pitched fretwork counteracted by slick, tougher and more driving riffs in between.

'Let's Not Keep In Touch' is possibly the band's most memorable song to date. The relationship between the guitar and the bass is like opposites attracting. The brute force of the bass is low and filthy, while the guitar churns out sharp screeches. When both instruments stomp out in unison, it's very hard hitting, but it's really the sinister, dominant attitude of the song that makes it a winner. When the main riff comes around for the last time, it's fully cemented into your brain and will get you moving even on the first listen. Pearsons' vocals on this track are robotic, snappy and filled with punk rock vinegar as he spits lines that express his morbid view on the world such as, 'Depression gets distracted by the fattest cells that need to eat' and, 'It's time to scrape by and watch boring crap on repeat'.

On 'The Inevitable End', Pearson sounds more bitter than ten Jonny Rottens, while the instruments  (mostly) take a break from punching up and instead become suspense filled with distorted tremolo picking and jittery drums. Despite its difference in pace and strength, it flows with the rest of the album still sounding bleak and nasty. 'This Should Hurt A Little Bit' lives up to its title feeling like you're on a twisted, speedy merry-go-round one second with mathy stabs, and then thrown off it in the form of more muscular groove driven riffs. 'Wooden Nickels' is rock 'n' rolling, but still vicious. The instrumentation in this one is bouncy and even danceable. Pearson's vocals are still angry and there's still an overall ugly vibe, but at the same time you can picture people dancing to it on a 50s dance floor.

The album's closer 'Strong Wrong Opinion' is limp with a bassline that plods moodily with significant space between notes in a good post-punk fashion, while a 4/4 timed riff is palm muted away to inject some flow in the song. It's Retox once again treading new ground, but still with their trademark harsh vocals and overall tone. Many aggressive bands have tried and failed to end albums on a less brutal track, and failed because it breaks momentum. However, this succeeds because it just puts one element, the gloominess, at the forefront for a change, as opposed to hostility being the dominant force.

For a band who'd already sounded so fresh in aggressive music circles, Retox have outdone themselves. It's incredible how they can take all these elements that have always existed and have always gone hand in hand, such as anger and loudness, then make them sound so distinctive to the band. This is Retox displaying their unique sound at its best; the sound of a band shaking things up.