Review of LP3 Album by Restorations

There seems to be something brewing in Philadelphia. Restorations' third full-length album, handily titled 'LP3', stands alongside The War On Drugs' 'Lost In The Dream' as a highlight of 2014. That both records are respectively their third, and that both bands hail from the same east-coast city, seems little more than a coincidence. However, it's a sign that the music scene they are emerging from is nurturing real talent. In honesty, there's very little that you need to know about 'LP3' beyond the two-word review submitted by one Amazon shopper, quite simply: "nailed it." 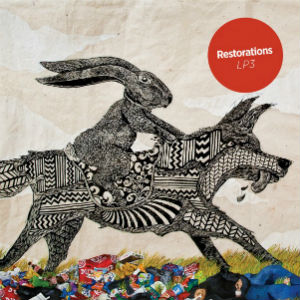 As you'd expect from a SideOneDummy release, 'LP3' is a punk record at its heart, but it's a broader proposition than just falling into one particular category. The five-piece draw inspiration from a number of sources. The sole similarity with The War On Drugs is that most songs build to a glorious cacophony of noise, Restorations are far from a one-trick pony though. Opener 'Wales' is probably the rawest cut here. Briefly echoing the sun-drenched desert rock of QOTSA, Jon Loudon's gruff vocal is a defiant call to arms set against a wall of guitars.

Interestingly, Restorations' Bandcamp page lists tags including Punk, Post-Punk, Rock, and Shoegaze, for 'LP3'. At different points of the record any number of those descriptions are valid. But noticeably, although each song expands the breadth of the band's ambitions, no two tracks sound the same. So as the record progresses and brass arrangements are introduced (initially on 'Misprint'), it makes sense that this isn't going to be a Punk record full of three minute songs, but something a little more challenging. That extends to Loudon's lyrics too. At times there's a distinctly literary or filmic quality such as the closing bars to 'Separate Songs', which act as a quiet coda to the track. "Your forehead up against the frozen subway glass. Neon next-stop light blinks, 'maybe next year'."

If there is a strong comparison to draw between Restorations and another band, it's probably their former label-mates, The Gaslight Anthem. There's more than a passing resemblance between Jon Loudon and Brian Fallon's writing and delivery. There's also a strong emphasis on catchy melodies and piercing guitars. But the reason why I draw the comparison is mainly because 'LP3' sounds like the record The Gaslight Anthem forgot to make on their march to the mainstream. It's full of noise and adrenaline fuelled anthems, without being too self-aware of it's own brilliance.

So yes, as the man on Amazon said, Restorations have "nailed it." While I searched in vain for a valid criticism of their approach, I progressively fell more in love with each of the nine songs here. I wondered if my personal affection for bands from Philly was clouding my judgement, but I don't think it's even that. It's more likely that 'LP3' is simply one of the best records you haven't heard all year.