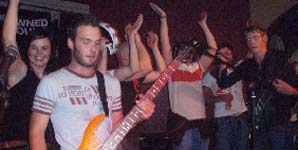 A bleak Saturday in Nottingham and in typical British style it only rained when you left the house or stepped out of one pub to go to another. Set all of that aside and on the 30th September 2006 these four bands were ready to show that their bands are on the brink of something big and their future is looking bright. At times when you have four bands playing you don't want to open the night, but on the flip side if the three bands in front play a great set then the pressure is on you as the headline act to pull it off.

Anyway it was going to be a Leicester band to kick it off and a Leicester band to rap it up. Quartershade start the night off and they have probably not played a better set. The band were up for it the sound was great and the crowed were hooked. When playing tracks such as Fragile one of the more know tracks by Quartershade you just felt that it all came together and that this was a tight knit band who have given somewhat of a good account of themselves and have set a high standard for the other three bands to follow. It is good when you hear people that have never seen a band before and express how much they enjoyed there set, which was certainly going to be the case as far as the next two bands were concerned.

Next up is Derby band Dirty Tux, crossing the border to Nottingham, what kind of reception were they going to get? As Bish (the lead singer) takes to the stage you just get the sense that he already has the crowed, and Dirty Tux proved that although people say they sound like the Arctic Monkeys, (maybe they do) but they do it in the Tux way! For those that follow Tux it was yet another high standard performance as expected as they flew through the tracks like Tux Breeth and Complex Sex.
AS confidence grew come the last track of the set Dirty Tux were to showcase some new material, did the fans like it, well in Nottingham DiS night history, the first stage invasion was made with fans dancing to it and the band just carry on as normal. The thing that these guys have above a lot of bands is a lead singer with a presence.

Last Gang, are the next to take the stage, probably the band that had the most expectation on their shoulders and they are not even headlining. This band is going places well tonight they are going to The Rose Of England in Nottingham, but you get the drift. They chaps from Leeds in short played a faultless set and once that first chord of Beat Of Blue was played beer was spilled everywhere people were jumping up and down like mad school kids. Yet this was not the favourite from the Nottingham crowed. Last Gang play Billy and probably lucky for the band there is no beer left to spill. This band posses some rip roaring addictive tracks. The thing is that you saw pure enjoyment and the want to share their music, which rubbed off on the crowed that gratefully listened.

Last up was redcarsgofaster and to be fair after moshing and jumping up and down like idiots, the crowed were well somewhat knackered and just stood back nodding their head in appreciation. The band blastered out their new single 24 Passes and previous single Micro. From what was yet another high performance set from this tight band their was the disappointing fact that they did not play Sanctuary to a few peoples frustration!! Redcarsgofaster finished the night as it started with rip-roaring tracks; they just maybe should of played Sanctuary

All in all a total top night made by everyone present from bands to the fans and even to the fact that you had to go downstairs for a pint!