18-year-old Raury has been making a bit of a name for himself as of late, with the buzz and hype around him steadily growing in the online stratosphere. 'Indigo Child' is his debut project, and it's an ambitious effort that has to be respected if nothing else. His boundary pushing, genre switching music is engaging and interesting, although at times the lyric writing does raise a few eyebrows. The production value on the album is also very admirable, and considering the Atlanta, Georgia native is only just getting started, this first outing is a pretty intriguing, occasionally confused, but definitely commendable project. 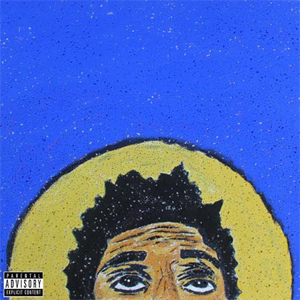 'God's Whisper' is the first track on the mixtape, and it's a solid opener. The acoustic guitar loop is backed by chants with reverb heavily applied, and the vibe is an organic one. Throughout the project, Raury reminds me somewhat of Kid Cudi, and this track specifically so, so maybe it's no surprise that Kanye West personally invited Raury to fly out and play some music for him. 'Superfly' is probably my favourite cut from the project, and it continues the acoustic guitar driven trend. Raury's vocals are convincing, although not always that powerful in their delivery, and the high-pitched vocal lines and 'whoops' are infectious. He seamlessly switches into a pretty nice double time rapped section, and although this comes across as slightly cheesy, his flow is on point and the delivery is nice. Throughout 'Indigo Child', I get the feeling that Raury does command a certain degree of respect due to his ability to explore different genres, something that would scare many musicians in the hip hop world, and doing so for your first musical outing is admirable, however it's a little strange that so much of his music also comes across as rather commercial.

'Wildfire' is a pretty interesting track, with layered harmonies over an electric guitar led beat with an understated kick drum. Raury has a tendency to get a bit deep lyrically on this track stating, 'I know you see the fire, got the eyes of a prophet', and this comes across as a little forced and surface-level, which probably wasn't his intention. 'Cigarette Song' is another patchy listen, although the acoustic guitar is once again pleasing to listen to, and this seems to be Raury's strong point. The verses on this track are heartfelt but catchy, which definitely shows his songwriting ability, but once again the chorus takes a turn that is too commercial for my liking. The mixtape takes more of a rock twist on 'Chariots Of Fire' and it's an admirable experiment, but again sounds a little confused. Raury's vocal style is decent, but it feels like he's still trying to find his own niche and his own sound. While experimenting with different genres is creditable and respectable, the end result just isn't as edgy as expected.

'Indigo Child' is definitely worth a listen. Raury's ability to genre hop is something that most artists don't possess, or at least choose not to even enter into, and his growing buzz is a testament to that fact. He's clearly not afraid to try out new things, and some are more successful than others. 'God's Whisper' and 'Superfly' are the two standout tracks for me, but the dreamy, spacey feel of some of the other songs are also enjoyable. Raury's tendency to take tracks in a poppy direction is what lets the project down at times, and it's this inconsistency that needs to be worked out. That being said though, he's a forward thinking artist, and in today's climate, that is something we need more of.