For more than a decade now, Yorkshire's Random Hand have been one of the UK alternative scene's most cherished bands with their unique style of ska punk injected with a metallic edge. Easy going trombone fuses with aggressive riffs and rhythms, and this distinct sound creates a wild live experience of which they celebrated their 1,000th show in 2011. Sadly, Random Hand are approaching a hiatus for an unspecified amount of time, but with this final tour it looks like they're wanting to make one last impact before taking a break. 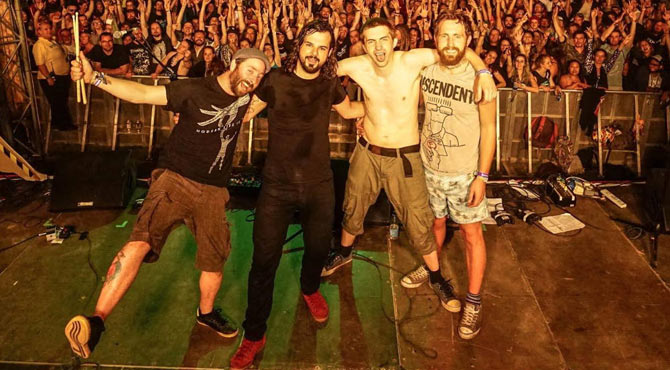 First, we had Hydropaths who play Flogging Molly/Pogues-esque folky punk. Armed with an accordion, mandolin and fast acoustic guitar, they got the night off to a jolly and lively start. Mr Shiraz were more straight forward punk with 0% folk and 100% visceral riffs and rasping vocals that did just as good a job of keeping people entertained. Next were The Human Project who thrilled with their politically-charged anthems and immediately got people jumping.

If they were moving before, it was no comparison to how the audience expressed their excitement at the arrival of Random Hand. Whether it was skanking, moshing or stage diving, there were very few people who weren't taking full advantage to go crazy for this band ahead of their hiatus.

Their vibe was friendly and danceable, with ska elements and, when it wanted to, a lot of punch - so you could always count on something to get your feet moving. This rang most true during 'Anthropology', for which Leitch prepared a Wall Of Death. When the song's cascading drums and emergency siren sample began, all hell broke loose. It was fitting to hear the ambulance sound, given that a lot of people needed one after slamming into each other.

On the opposite end of the spectrum was 'Anger Management', which, for the most part, encouraged friendly skanking along to its marching trombone and sing-a-long gang harmonies. Of course, this song's feral climax had people once again going crazy, but this time around the atmospheric horn sections added a more majestic feel.

The end of the show brought a mix of dance and aggression; 'Scum Triumphant' is an upbeat but fierce song about the importance of individuality, to which people passionately sang along. Random Hand madw it very clear that it was their last song of the night, so people were keen to take advantage with overlapping stage dives and crowdsurfing. Dangerous? Probably. Fun? Absolutely.

Thanks to the strong ska elements, the essence of Random Hand's was about the dance, as well as traditional rowdiness and having a blast. Random Hand have given us countless shows like this one before now, and let's hope we don't have to wait too long before the next.