Review of Roc Ya Body Single by Ping Pong Bitches 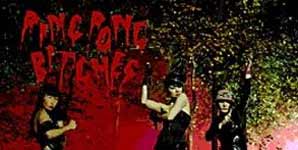 If the alias of Ping Pong Bitches wasn't enough to strike fright into the more conservative members of the music industry community then the "don't give a fuck" image of this all-female London based band should certainly leave them trembling with fear.

The Single Roc Ya Body is a heavy electro pop-rock song with guitar, quirky if not incredibly cheesy synth parts, Gwen Stefani-like vocals and bundles of attitude.

The B-side Gatecrasher follows a similar path, relying on a 4/4 bassdrum, more cheesy synth takes and another simple guitar line, and just when you thought this release may bear a saviour in the form of the Roc Ya Body remix.your treated to what is practically the same approach all over again.

Whilst the Ping Pong Bitches persona is one of a tongue in cheek nature I don't think that approach alone can make up for the fact that Roc Ya Body is a pretty uninspiring release that seemingly gets worse after each listen. The lyrics lack substance, the vocal arrangements are poor, the synth lines become tedious, even the cd artwork is beyond amateur. It comes across as if it was all constructed by some failed German euro-pop group. And if that wasn't enough your left with the biggest headache known to man. Poor.