French synthwave artist James Kent, A.K.A Perturbator, has spent the last few years injecting new life into synth music. Across albums such as 2012's 'I Am The Night', 2014's 'Dangerous Days' and this year's 'The Uncanny Valley' Perturbator has moulded a sound that's monolithic, transcendent and enduring due to a cybernetic tone, metal edge and repetitive beats that hit hard. There's a huge 80's vibe to his sound, being akin to soundtracks to classic sci-fi films such as Bladerunner, however just in how tough Perturbator's sound is, it's every bit relevant and can go toe to toe with anything else in contemporary electronic music. Tonight, he plays Leeds' Key Club to really take people to the future. 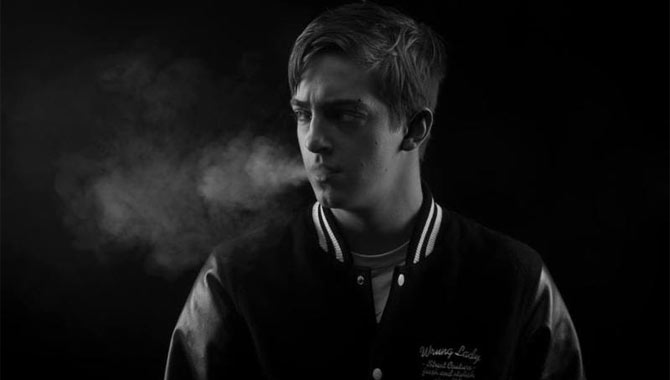 First though we have French duo Horskh who entertain with throbbing industrial beats with some adrenaline injected by fierce drums. Their lively frontman gives it his all, headbanging, thrashing at his guitar and leaning off the stage.

Gost enters wearing a skull mask and instantly gets people going turning this place into a rave with hard-hitting soundscapes that has a lot in common with tonight's headliner. Rapid flashing lights and Gost himself jumping all over the place on-stage makes it jaw dropping to watch as well as a blast to dance to, you even worry Perturbator isn't going to match it, however you're shortly proven wrong.

Perturbator hits the stage and instantly diminishes any doubt there could possibly be that he's not going to kill it. With a breath-taking stage show with revolving light beams, a folded-out, zig-zagging wall surrounding him and a wall of flashing circles, it's impossible not to be entranced by what's on display visually here. The Key Club might be a basement venue, but that's not stopped Perturbator bringing a display worthy of an arena into play.

Then there's the music, which combined with the lights makes for the most hypnotic and mesmerising experience. Perturbator's beats are relentlessly pulsating and the synthlines are transcendent to really make you feel like you're having an outer body experience. People aren't dancing quite as hard as they were to Gost, however Perturbator's music does also have an element of serenity with euphoric keys, so even if people aren't full-on stomping, that doesn't mean they're not possessed. Instead, Perturbator's formula of seemingly never-ending sequences and impenetrable muscle, has the crowd in a moving, but subdued state, where they're lightly headbanging and swaying along, but getting animated when the music hits harder.

Recurrence is one of Perturbator's biggest strengths, but it's also his only slight weakness. This music is ongoing and doesn't drastically vary with the tempo being the only thing that really changes. This means if you're not into it a decent amount it can get tiring for you, but if you're on board, then this ride you'll want to stay on forever, and perhaps that's almost the test that comes with listening to Perturbator. You can either ran away or look it straight in the eyes.

The regular venue lights come on bringing this show to an end and it feels like crashing back into reality. Perturbator played a show which was akin to taking the red pill and waking up in a futuristic dimension. Like emerging from Plato's cave, you either find it horrifying or beautiful, but either way you can't deny what Perturbator has to offer is utterly powerful.